36.4" (92 cm) LCD Monitor
The EIZO DuraVision FDH3601 features a 4K x 2K resolution across a 36.4" screen. It is ideal as an ATC primary control monitor or for use in geophysical services.
prevnext
2 items
Compare

The DuraVision FDH3601 displays 8.8 megapixels (4096 x 2160 native resolution) across its 36.4-inch screen. This is enough pixels to display the content of several desktop monitors but without the distractive bezels between screens. 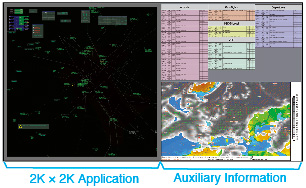 Using the latest white LED backlight technology the DuraVision FDH3601 offers a brightness range from 30 cd/m2 up to 700 cd/m2, making it ideal for almost any ambient lighting environment.

With an extremely tight pixel pitch of 0.1995, text and images such as contours on a map can be displayed in fine detail. The tight pixel pitch allows the monitor to display the equivalent of four full HD monitors on its 36.4-inch screen without bezels to divide the screens.

Zero Watts When Turned Off

When the monitor is switched off via its AC adapter's main power switch it consumes no electricity at all.

Brightness and Color Uniformity with DUE

Fluctuations in brightness and chroma on different parts of the screen are characteristic of LCD panels. Generally, the larger the screen, the more noticeable these uniformity errors become. EIZO's Digital Uniformity Equalizer (DUE) helps to compensate for these errors, resulting in a much more uniform image.

The DuraVision FDH3601 includes two dual-link DVI-D and two DisplayPort connectors for connecting to up to four computers. A USB hub with one upstream and two downstream ports is also included.

A 16-bit look-up table offers a palette of about 278 trillion colors from which the most appropriate 16.7 million are displayed. This produces smooth reproduction of color and grayscale tones. Furthermore, with the DisplayPort inputs, the monitor can display simultaneous 10-bit color *. This is more than 1 billion colors shown simultaneously which is 64 times greater than the 16.7 million colors of 8-bit display. The result is even smoother display of gradations and reduced Delta-E between two adjacent colors.

The DuraVision FDH 3601 comes with EIZO's ergonomic FlexStand 2. It offers very versatile positioning with 100 mm height adjustment, 25° tilt, and 344° swivel. The monitor can be removed from the stand and mounted on a VESA-compatible arm or wall mount.

An on-screen button guide appears above the buttons to indicate what each one is for. This is convenient when using the monitor in a dimly-lit working environment. Furthermore, the brightness of the power lamp can be adjusted in eight stages including shutting off the lamp.

The white LED backlight provides very stable brightness even at low settings like the monitor's minimum brightness of 30 cd/m2. Unlike a CCFL backlight, an LED backlight is mercury free so it will have less impact on the environment when it is disposed of.

The DuraVision FDH3601 uses an LCD panel that has viewing angles of 176° and exhibits minimal color shift so two or more people can view the screen at once.