Stand bracket for thin client or mini-PC
Dedicated bracket for attaching a client to the back of your monitor. 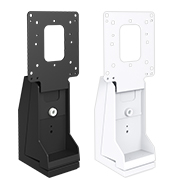 Free Up Your Workspace with a Stand Bracket

Match Accessories from Front to Back

The PCSK-03 / PCSK-03R is available in both black and white for an all-around coordinated look between the monitor's cabinet, bracket, and cables.

Safe to Use with Various Client Terminals

The bracket has been tested with several companies' client terminals. When installed correctly, the bracket does not interfere with the balance of the monitor so that even a heavy client terminal will not cause your monitor to overbalance.