What is Color Universal Design?

People see color with significant variations. In Japan, there are more than 5 million people in total who see color differently from ordinary people, due to their genetic types or eye diseases. Color Universal Design is a user-oriented design system, which has been developed in consideration of people with various types of color vision, to allow information to be accurately conveyed to as many individuals as possible.

Who is it for? 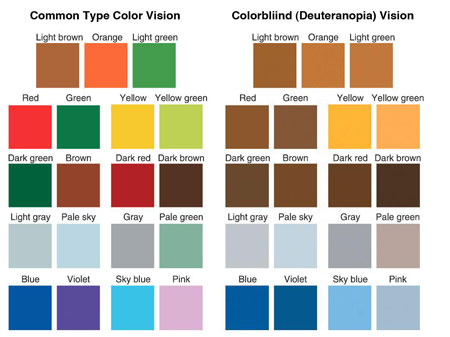 In addition, there are several tens of thousands of people who cannot distinguish any colors and can tell differences in color only by their brightness or darkness. Most of these people also have weakened eyesight. Age-related illnesses such as glaucoma and cataract can affect how we see color as our eyesight weakens. In Japan, there are over 1.4 million cataract patients in total and approximately 5.6% of the population aged 65 or older suffers from the disease. As society ages, the number of such patients tends to increase. Furthermore, diseases such as diabetic retinopathy and retinitis pigmentosa can also weaken eyesight. A total of several hundreds of thousands of people are so-called "people with low vision3, with corrected vision of 0.05 or more and below 0.3 in both eyes, who require consideration for not only their weakened eyesight but also simulated views and degrees of contrast.