Not everybody views color in the same way. Certain colors are perceived differently by people with color blindness so it is important to take into account different types of color vision when choosing colors for any type of design. This is called "color universal design" and applies to the use of colors in newspapers and other printed materials, signs for public facilities, maps, and other mediums where color is used to convey information.

UniColor Pro and specific EIZO monitors present a hardware-based solution so they change how content is displayed on screen in real time without affecting the data itself. They simulate two types of red-green color vision deficiency (protanopia and deuteranopia) and one type of blue-yellow color deficiency (tritanopia). An EIZO-developed ASIC (application specific integrated circuit) inside the monitors does all the color conversion processing in real time - even moving and blinking images. With UniColor Pro software (compatible with Windows 7/Vista/XP/2000 and Mac OS X 10.3.9 or later only), you can instantly switch among four modes - Original, Protanopia, Deuteranopia, and Tritanopia. In addition, you can capture images and print them out for comparison.

In developing the monitors, EIZO worked closely with the non-profit Color Universal Design Organization (CUDO) based in Tokyo, Japan, to conduct experiments with colorblind test subjects to improve the ability to identify difficult to distinguish colors.

There are two ways to simulate colors. The first is to use software to perform image editing/manipulation on the data itself, and the second is to use hardware that changes how color appears on the monitor's screen.

You can capture an image when any of UniColor Pro's simulation modes are active. You print them out and compare the differences. 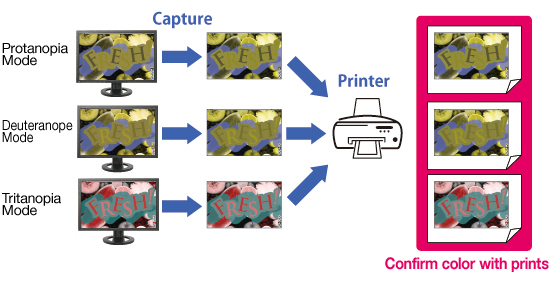 You can capture an image when any of UniColor Pro's simulation modes are active. You print them out and compare the differences.

The following points should be noted when using the monitors to view images converted through the simulation process.

(1) In the simulation of protanopes and deuteranopes, the vision of the most strongly affected people is reproduced. Approximately one third of colorblind people are estimated to be in this category. The remaining two thirds have their color vision somewhere between that and the common-type color vision, including those whose vision is very similar to the common-type vision. For this reason, please keep in mind that not all colorblind people, including those more weakly affected, have color vision as indicated in the converted images.

(2) When there is a color that is difficult to distinguish, people judge it by using information other than the actual color as a complement. For example, we view an apple as red and paper as white, even when both are lit in red under a red light. The same applies to colorblind people. For them, it is difficult to distinguish some tones of sky blue from some tones of pink. In this case, colorblind people view that the clothes worn by a man should be sky blue (even if pink), and those worn by a woman pink (even if sky blue). This happens because people judge colors by comparing them with their memories and experiences - men often wear sky blue while women wear pink.

Simulations do not show you "which color colorblind people see as a certain color." Therefore, they should only be used to understand "which colors on the screen are difficult for them to judge".