Since monitor adjustment is conducted by the user, software calibration involves issues of precision, with minor variations occurring each time such calibration is conducted. In addition, since the adjustment operations themselves are not simple, they can be difficult and time-consuming until one gets used to these processes.

In addition, some calibration kits offer only low precision in adjustment and rougher profiles.

When a monitor displays white, it is combining the basic colors of red, green, and blue. As shown in the illustration below, when displaying a capital letter "T" in white, pixels light up in red, green, and blue, appearing together to the human eye as white.

Calibration can be used to adjust the color temperature of the resultant white.
For example, in a 6,500 K white, the colors red, green, and blue are output largely at 100%.

The illustration below represents an image displayed using 256 gradations in the three RGB colors. Since in a 6,500K white the colors red, green, and blue are output at 100%, gradation in this case is relatively good. 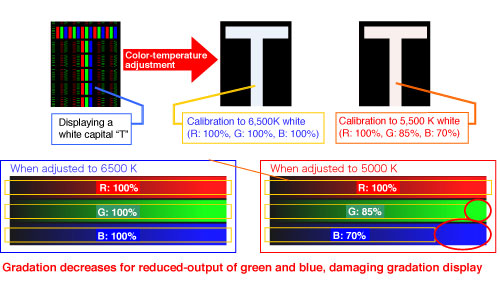 In addition, since in a 5,000 K white the color red is output at 100%, for red all gradations can be used. However, since green is output at only 85% and blue at 70%, for these colors the gradations circled in red below cannot be displayed.

In this way, reductions in the gradation of the reduced-output green and blue affect gradation performance, leading to gradation deviations, damage, and tinting.

Given these drawbacks, care must be taken when using software calibration.