In Breast Cancer, Early Diagnosis is Everything

Breast cancer is the leading cancer in women worldwide, with 1.7 million people being newly diagnosed with breast cancer in 2012. The earlier a breast cancer can be detected and treated, the higher the chance of the patient surviving and receiving benefit from medical treatments. The World Health Organization states that in countries with advanced medical care, the five-year survival rate of early stage breast cancers is 80 – 90%, however for cancer diagnosed at advanced stages, the survival rate drops to a tiny 24%. Because of this, on-time breast screening is the most common and effective way to diagnose breast cancer in many countries. 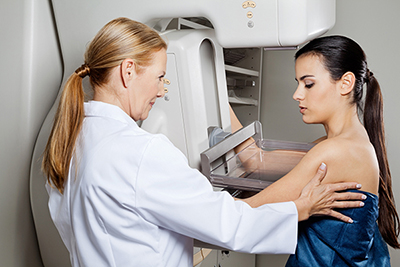 Breast screening is a series of procedures that run a mammography scan of the patient.  The screening procedure takes a few seconds and is meant to detect the existence of breast cancer. If a cancer is found, more thorough testing is required to determine the characteristics of the cancer. However many breast cancers are not detected in the screening phase, making it difficult to detect them in the early stages. This is something that must be overcome.

Mammograms discern between the four types of breast tissue – mostly fatty, scattered density, consistent density and extremely dense – through varying shades of gray. Fattier material is dark and dense material is bright. Cancers are able to show up on mammograms as varying shades of gray; small, bright and dark dots and also abnormal breast shapes that only trained eyes can recognize as risky. Due to the varying shades of gray that cancers appear as, spots can often blend in with the surrounding breast tissue. This makes it very difficult for doctors to distinguish cancers from breast tissue. In fact approximately 1 in 5 existing breast cancers are not discovered in screening. This is called a false-negative diagnosis. 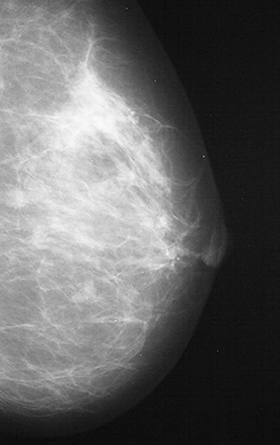 Nonetheless there are ways of minimizing the likelihood of a false-negative diagnosis. One of these is to invest in a high-quality medical-grade monitor with specifications designed for mammography. Printed scans and commercial monitors cannot be compared to the reliability and accuracy of medical grade monitors. Only medical grade monitors are able to display DICOM defined grayscale changes. DICOM Part 14 compliant monitors display grayscales in a visibly-linear scale, according to JND (Just Noticeable Difference). This means that doctors can see small grayscale changes; highlighting cancers that may otherwise be invisible on printed scans or commercial monitors which only display in gamma modes and are not visually-linear. Doctors have only minimal time to view scans, so differences in grays must be as noticeable as possible for doctors to recognize cancers during scanning.

The monitor must be able to recreate this visibly-linear grayscale at all times. And, as monitors naturally degrade over time, this means that they require calibration to restore their grayscale. Even if a monitor is calibrated at the factory, various calibrations are still required. According to the ambient light conditions in the reading room, the medical grade monitor may require an Acceptance Test – which adjusts and re-calibrates the monitor before the first usage. After this Acceptance Test the medical grade monitor requires a periodical test called a Constancy Test that includes checking the luminance, grayscale and uniformity to maintain optimal viewing conditions. All of EIZO’s RadiForce monitors are capable of performing calibration. And in addition to this, all RadiForce Mammo-Series monitors have integrated front sensors (IFS) so that the monitor can self-calibrate. Monitors can be set to calibrate themselves after a certain period of time without any human intervention required. Doctors can rest assured that their monitors are providing the optimal viewing conditions, without having to waste time manually calibrating them themselves.

In addition to an appropriate grayscale, a maximum brightness above 350cd/m2 and a contrast ratio above 1000:1 are also required. The human eye (HVS) is better at distinguishing changes in contrast with increased luminance, therefore by increasing the overall brightness of the monitor, differences in shading can be more easily noticed – even in dark areas. The ACR (American College of Radiology) recommends diagnostic monitors to have luminance levels of 350cd/m2 for general diagnostic purpose and 420cd/m2 for digital mammography. In addition, medical grade monitors certified with FDA 510(k) clearance for mammography are a minimum requirement to follow. Without a medical-grade monitor, cancers may not be diagnosed early enough, leading to delayed treatments and lowering the survival rates of patients. 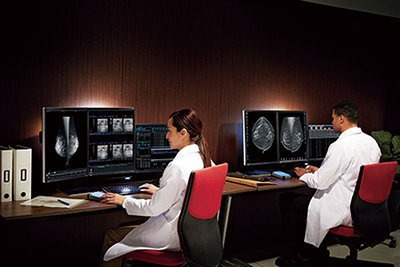 Another important way to ensure you’re viewing images as best as possible is through controlling the reading room environment. Human eyes (HVS) are sensitive to contrast changes, so it’s important to have an ideal environment where the doctor can see details on the screen without being affected by their surroundings. Furthermore fatigue and eye strain increases with brighter ambient lighting, making interpretations less accurate and dark areas may be too bright. The ACR suggests that ambient light has to be low and consistent, and equal to the average luminance of a clinical image being displayed (generally from 20 to 45lx). Global regulations like EN (European Standard) and ISO (International Standard) recommend an ambient environment have no more than 50lx for mammography and general diagnostic usage with 100lx as the maximum allowed. Furthermore glare and reflections have to be minimized using medical grade monitors with special antiglare coatings. EIZO’s RadiForce Mammo-Series monitors come with an anti-reflection (AR) or anti-glare (AG) option to ensure maximum visibility depending on the environment. 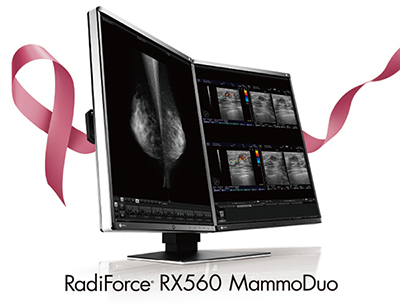 Another point to consider when purchasing a monitor for breast cancer diagnosis is whether to buy a color or monochrome monitor. 2D mammograms and 3D rendered breast images are the most common breast cancer-detecting methods, and are inherently monochrome. However other breast cancer-detecting tests, like ultrasound, MRI and pathology use color to highlight artefacts. Doctors frequently use these tests in conjunction with each other in order to understand as much as possible about each patient’s case.  These images are often displayed separately on both a monochrome and color monitor, however many doctors find this expensive and not efficient as they lose information with such fragmented viewing. The most preferred option is to use color medical grade monitors designed for mammography, which allow both image types to be shown at the same time. Currently some medical grade monitor technologies are available to switch between DICOM Grayscale images and colored Gamma 2.2 values to show both accurately. One of these is the RadiForce RX560 MammoDuo, a pair of 5 megapixel medical grade color monitors designed for displaying both monochrome mammography and color modalities such as ultrasound, breast CT and MRI.

Breast cancer is one of the most prevalent and difficult to treat cancers in the world, and early diagnosis is essential for patient survival. To ensure early detection, several factors need to be considered: a combination of education, the correctly adjusted ambient environment, and the ideal monitor. Medical grade monitors designed for mammography, with DICOM calibration, and anti-reflective coatings should be used, and it is mandatory to have a QC (Quality Control) solution in place to be sure that the devices will maintain optimal visibility over time. This is the best way to ensure breast cancer patients are receiving the best possible chance of survival, by finding cancers early enough for successful treatment.