Skyguide - In the Kingdom of Skies | EIZO

Seven days a week, 24 hours a day. Skyguide is the aviation safety organization responsible for securing Swiss airspace along with delegated areas in neighboring countries. The company has around 1,400 employees at its 14 sites to ensure air traffic safety every single day of the week. Passengers boarding an airplane are often completely unaware of all of the hard work and coordination that go on behind the scenes before take‐off. Skyguide works on behalf of the Swiss Confederation to ensure safe, efficient, cost-effective air traffic management within Swiss airspace. The company’s responsibilities include civilian and military air traffic control, aeronautical information services, telecommunications and technical services for the installation, operation and maintenance of air traffic control systems. Skyguide is active at 14 locations in Switzerland – with sites at the national airports in Geneva and Zurich, at regional airports, and at military airbases. The air traffic control company is also responsible for maintaining 240 facilities throughout the entire country. Skyguide is headquartered in Geneva. 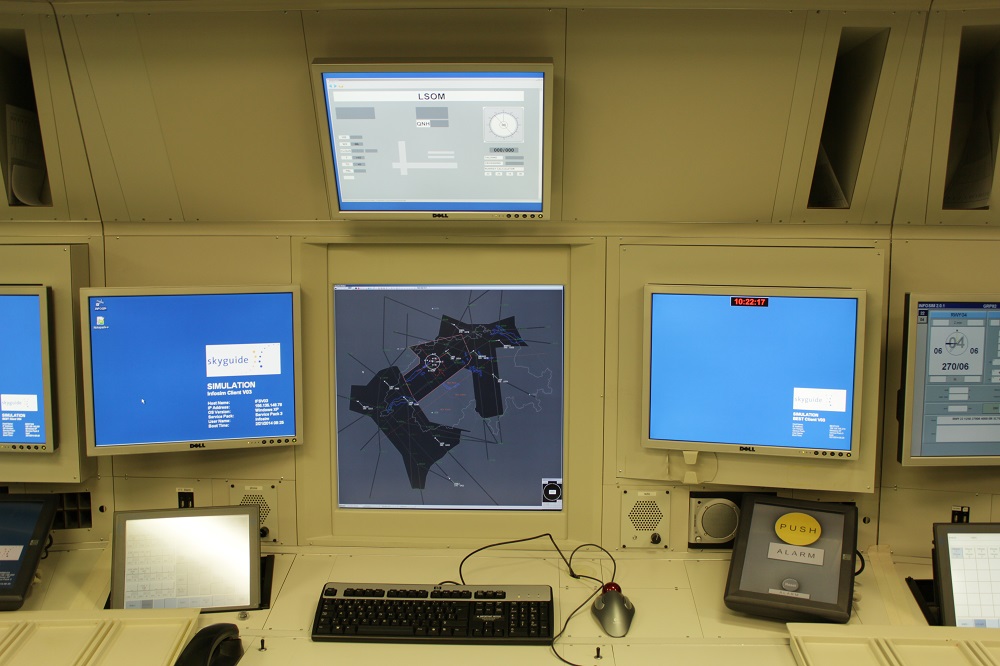 At Skyguide, safety always comes first. Coordination plays a central role. Whether due to staff issues or technology, failures and unforeseen events can occur at any time – day or night. So, staff and technical equipment must always be on standby in case of an emergency. Every day there are at least 15 people who work in three different shifts in the Zurich tower alone. In addition, around forty people work per shift at the radar consoles in the Area Control Centre (ACC) in Zurich. This means that each day close to 135 people are busy securing Swiss air traffic at the Zurich location alone.

Along with its main area of responsibility – ensuring safe air travel in Switzerland – Skyguide trains apprentices to become air traffic controllers and offers additional training courses both domestically and internationally. Prospective air traffic controllers from all over Europe take advantage of the opportunity to learn there – at one of the best-equipped exercise and training centers in the world.

The fascinating world of aviation and the desire to be a part of this exciting field are no longer simply a “boyhood dream”. Women are also ideally suited for the profession of air traffic controller, as it demands an innate ability to multitask. The number of female aviation enthusiasts interested in launching a career in this field has grown dramatically in recent years. Skyguide recruits the air traffic controllers of the future for Switzerland and a number of other countries. An absolutely clean bill of physical and mental health is a basic prerequisite. But candidates are also expected to have good, rapid decision-making skills, an ability to concentrate intensely for long periods, excellent learning skills, efficient working methods, a keen sense of observation, and a knack for keeping everything under control at all times. 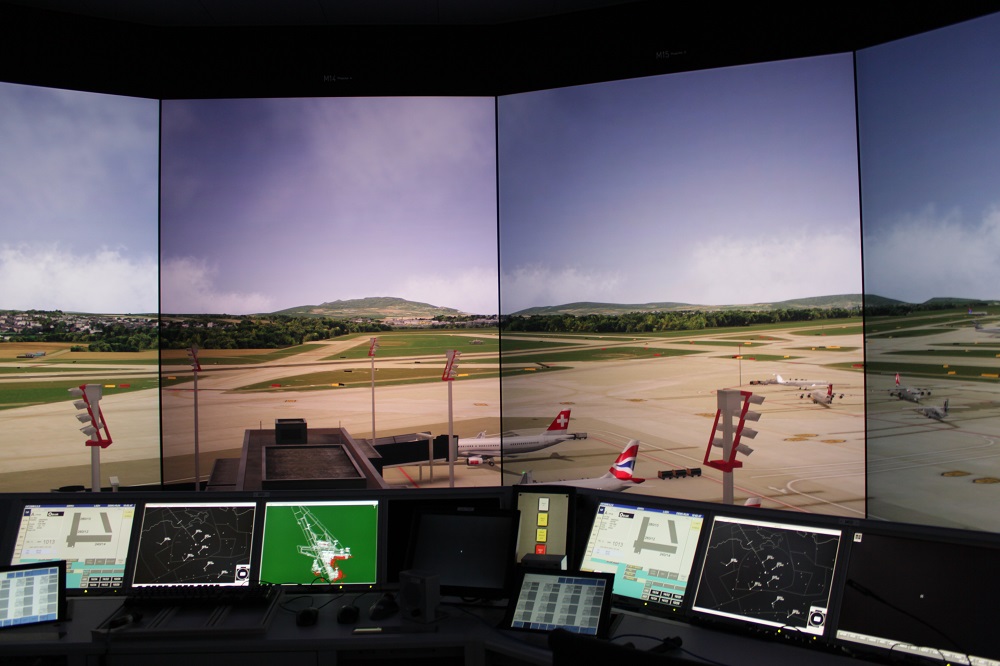 Three exact replica simulation towers are the ideal proving grounds for testing trainees’ mettle. Skyguide makes it possible to perfectly replicate any type of scenario. Weather conditions, emergencies – such as a fire, for example – unforeseen events, virtually any situation can be simulated and tested. The simulation tower can imitate a variety of airport environments and features an incredible 360° view. The entire working situation is set up so that it is absolutely identical to real-life operations. Communication with pilots is also realistically simulated. Unlike true daily operations, where safety plays the main role, the training center focuses on coordination. Around 600 people complete training courses using this simulation equipment each year. This includes both basic and advanced training sessions as well as training for entirely new systems and skills. Perfectly planned training sessions ensure that the Skyguide training center is used as efficiently as possible. Everything needs to run smoothly at all times, whether or not technical defects occur.

Safety is also the number one priority when it comes to air traffic control. Everything here features built-in redundancy. Consequently, the demands on technology here are extremely high. Skyguide has been using EIZO monitors since 2010. Image quality became an issue due to the age of some of the previous monitors. Contrast and brightness became poorer over time, which in turn resulted in concentration difficulties. Since there is no way to compensate for issues in this area, Skyguide decided to invest in new equipment. Now Skyguide has around 300 EIZO monitors at its sites in Zurich and Geneva. When asked whether they noticed the difference when working with the EIZO monitors, Skyguide responded with a resounding “yes”: “The higher contrast, greater brightness and precise definition have an enormous impact on our work and enable us to concentrate fully without any compromises whatsoever. Another great thing about working with EIZO monitors is the flicker-free display, which reduces eye fatigue tremendously. The seven-hour shifts in air traffic control demand employees to focus intensely on their screens for long periods, so the flicker-free LED backlight significantly enhances productivity. The improved energy balance and easy color structure maintenance made the decision to invest in EIZO an easy one. Of course, we haven’t been using our EIZO monitors for very long. So, it’s difficult to say with certainty what their overall impact will be. However, we are very optimistic and extremely satisfied,” Skyguide project manager Patrick Diezi said in response to EIZO’s inquiry. 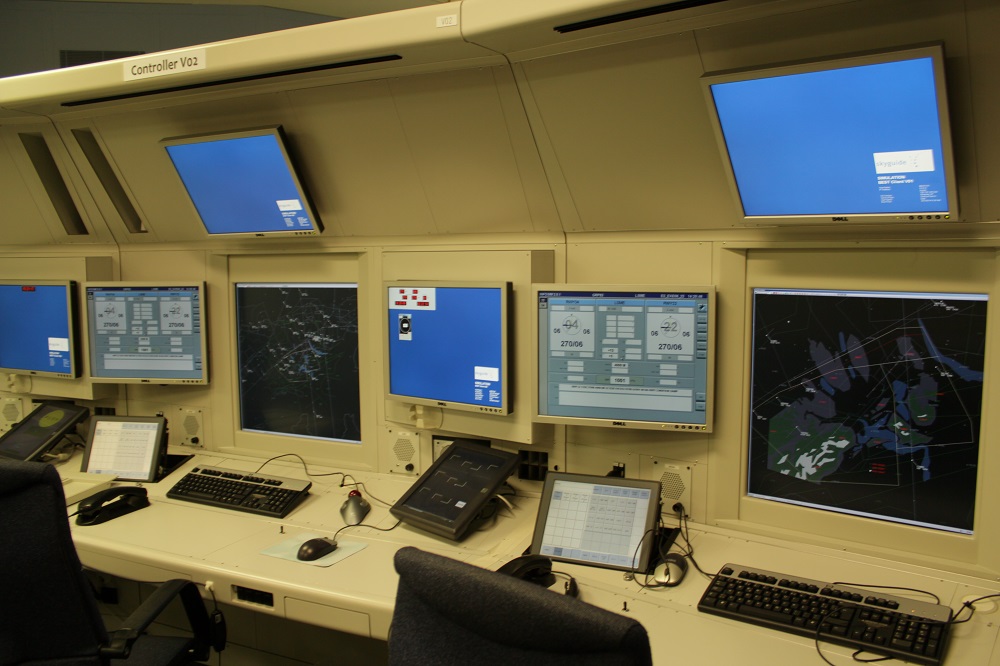 Naturally, reliability is of the utmost importance to Skyguide, which is why the company depends on EIZO quality. But no matter what the technology, Skyguide always has a number of replacement devices on hand in the event of equipment failure. This allows them to replace a defective device immediately without interrupting the air traffic controllers’ work. This applies to all technical devices in use – from entire computer systems to individual cables. Nothing can be left to chance. Finally, the question arose as to what the world of air traffic control training looked like before monitors were invented. It’s hard to believe but before the advent of computer monitors, simulation worked as follows: A map was placed on a large table. There was a small plane on the map and the communication between the pilot and air traffic controller was simulated via headset. Of course, there was much less air traffic back then. Still, most people will agree they’ve never felt safer when boarding an airplane than they do today – thanks to Skyguide.