Airservices Australia is a government-owned organization, formed in 1995, providing safe, secure, efficient and environmentally responsible services to the aviation industry. It manages air traffic operations for over 90 million passengers on more than four million flights every year. Airservices provides the aviation industry with aeronautical data, telecommunications, navigation services and aviation rescue firefighting services and employs more than 4000 staff. Airservices has approximately 1000 air traffic controllers, working from two major centers in Melbourne and Brisbane and 28 towers at international and regional airports. In addition to this, Airservices also maintains a range of aviation navigation and surveillance equipment around the country.

The Airservices Learning Academy’s purpose is to provide quality education and training aligned to Airservices strategic and operational priorities and has two campuses at the major centers in Brisbane and Melbourne. Air traffic control students study for a Diploma of Aviation (Air Traffic Control) before undertaking on the job training at one of Airservices’ many locations. The Learning Academy supports 140 trainees per annum and delivers courses in en route, approach and tower, providing the best possible training for students in preparing them for a career in air traffic control. Students’ learning is undertaken on state-of-the-art simulators providing realistic scenarios for their training. David Bailey manages the team responsible for Simulator Integration, who provide the detailed, accurate scenarios. 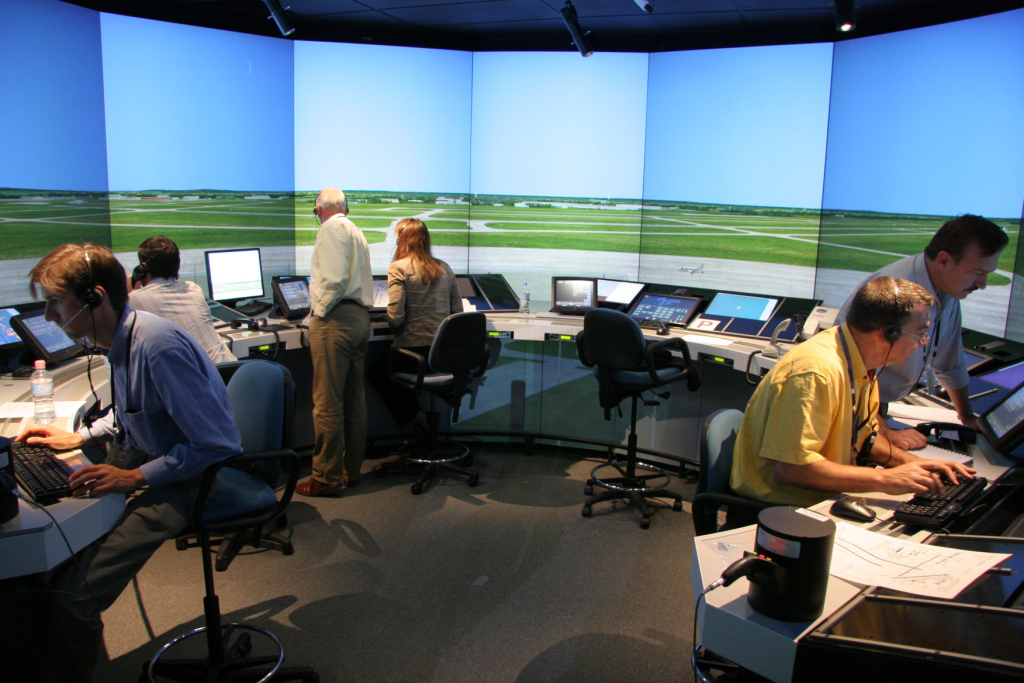 The Challenge of Change

Mr. Bailey and his team are constantly seeking innovative technology as a means to enhance the training provided at their facility. The existing simulator system has the capability to record and replay, however, there are technical reasons which limited its ability to provide quality screen video and images. The previous simulator system had the capability to take one-off screenshots which required them to be manually captured at the correct moment in time. The screenshots were then used in classroom-based training de-briefs and in student and instructor documentation to enable basic visualization of scenarios. Mr. Bailey commented, “With the introduction of a new state-of-the-art simulator system, it became essential that a method of capturing quality images from the air situation displays be determined. The images are used in the student manuals and the instructor guides. This was the prime driver, however, the value and quality of the Re/Vue devices to capture video and audio was quickly realized.”

In the modern era of a media rich society, the Learning Academy team looked for new methods of delivering training material to students. The requirement for images and videos of the highest quality for simulation of real-world scenarios and assessment of student performance was identified as a top priority. Whilst modifications to the existing systems could be put in place to support the extraction of actual operator video, these would likely prove to be costly, require significant changes to the solution and implementation would take place over a timeframe which could prove prohibitive. Given the number of students in training at any time and the requirements for constant use of the simulators, the time available for development and deployment of such solutions is always at a premium.

Improved Capability with a Re/Vue Solution

Elsewhere at Airservices, a concurrent project was being undertaken for research into future air traffic control technology for operational systems. As a result, Airservices were already considering the implementation of hardware-based video recording solutions for air traffic control operations to support incident investigations. An internal discussion between like-minded groups led Mr. Bailey’s team to further investigation how hardware-based video recording and streaming could compliment the training they offer to their students. An initial pilot program with a single Re/Vue Mini device was satisfactorily completed. The results of carrying out basic video recording instantly demonstrated Re/Vue’s potential for improving the training and simulation environment. Quick and easy installation, non-intrusive passive video signal split and superior quality of lossless video recordings with the benefit of synchronized audio were key. Being able to manage the device remotely meant no downtime for the training system.

Potential capability was identified with the ability to remotely monitor activity on the student’s screen at any time. Achieved through Re/Vue’s live streaming feature, instructors have the potential to remotely monitor progress of the student without the need to be by their side. For added peace of mind, it was good to know that streaming could take place with Re/Vue even if the recording function is disabled. The superior quality and level of detail captured with Re/Vue was witnessed. With mathematically lossless encoding at the display refresh rate, typically 60 Hz, the training team was able to see exactly what the student saw and how they interacted with the simulator system. The lossless encoding provided high fidelity video. Flexible playback includes the ability to zoom in on any part of the screen and move the center during playback. Remote monitoring would provide the same high-fidelity video.

For playback of recordings, the extremely small packaged Re/Vue playback software application, a single Microsoft Windows executable file, enabled team members to playback recordings in lossless format true to the original. The expert quality of recordings was further witnessed on replay utilizing the ultra-responsive zoom and pan features of Re/Vue player. Instructors and the instructional design team could zoom in and capture images in original digital quality for inclusion in training materials. Extremely portable, requiring no installation and therefore leaving no footprint on the host computer, playback software and recordings could be stored on portable media, such as a USB stick as required. The portability of the Re/Vue player and relatively small file size, due in no small part to Re/Vue’s proprietary compression algorithm, allowed students to take away instructor designed pre-recorded data for further learning in their own time. “The use of Re/Vue as a tool to create specific training scenarios for replay on PCs, laptops, or tablet devices is immediately clear. EIZO has been very responsive to our specific needs, particularly for troubleshooting and the provision of an AV export capability,” continued Mr. Bailey.

Further collaboration and feedback as the pilot program progressed led to rapid, agile product development by EIZO and release of additional features and functionality to provide added benefits to Airservices. Airservices found the included converter utility to be very useful as it allowed them to convert the proprietary format to industry standard formats such as .avi or .mov. This gives Airservices the capability to quickly and easily produce real life training material to students for review on their own devices whilst also being able to provide examples of best practice for use in presentations, publications, and online training material.

To improve the quality of training, the Airservices Learning Academy procured four Re/Vue Mini devices dedicated to capturing air situation display video and screen captures for use in simulator course documentation. The units are networked to a management computer that provides remote access and the potential for live streaming capability. This capability would allow the instructor to monitor multiple students’ performance in both real time and after the training sessions have concluded, with this comes a huge range of further potential benefits that Airservices continues to discover as they gain greater experience with Re/Vue.

Following Airservices evaluation of the robust, reliable proven technology in Re/Vue, under consideration now is an expansion to extend the Re/Vue recording and streaming network to cover all aspects of the training environment. With such a system in place, the requirement to review recorded examination sessions is met and the process for providing encouragement and targeted support to students during simulator session debriefs is much improved. Mr. Bailey commented, “With the use of the Re/Vue Mini recorders, the simulator team has been able to provide the instructors and the course design team with high quality images and video for the production of quality training documentation. The networking of the four recorders enabled the team to extract the required data without interruption to the development and delivery of the training scenarios.”

With the release of the Re/Vue Mini Duo and future research and product developments at the forefront of EIZO’s strategy, Airservices is confident that the technology will continue to benefit them. In collaboration, Re/Vue’s feature set will grow with Airservices aspirations for delivering excellence in the training and simulation environment, ultimately leading to cost and efficiency savings with training material of the highest quality. David Bailey and Liam Kett of Airservices Australia invited Selwyn Henriques and David Hindon of EIZO to visit the Learning Academy in Melbourne. The excellent performance and reliability of Re/Vue during the trial was discussed. Mr. Bailey and Mr. Kett noted that Re/Vue would not only benefit them in terms of usability but would also significantly reduce the time and effort required to produce training videos, making the provision of pre-recorded video data to students an extremely efficient process. Further collaboration was discussed and plans for product development and future releases were shared.