In 2013 Savills were refitting their London based HQ and were looking for a monitor solution that matched with the aesthetics of the high valued Savills brand. “When we first approached EIZO we had a set. budget in mind but we were insistent that our. requirements were not for any old monitor. We required a monitor solution which would match the needs of our organisation and the EIZO FlexScan EV2316W did just that. A professional monitor in both its looks and specification it helps to keep our carbon footprint in check whilst also fitting in well with the aesthetics of our then newly redesigned HQ. Since then the monitor has been continued across the Savills regional offices network.” Claire Tierney, IT Procurement Manager, Savills.
During 2015 Savills central London office has relocated and again there was a need to find a monitor to look the part in the new office space as well and performing all of the required tasks.

Claire continues, “Again we approached EIZO for our monitor requirements. We chose the recently launched EIZO FlexScan EV2450 with its ultra-thin bezel. Its futuristic style matched the modern aesthetics of our new offices whilst providing us with great benefits including, a power save function, human motion sensors, dual set up functionality and a fantastic 5 year warranty. We are looking forward to working with EIZO in the future.”

The EIZO FlexScan EV2316W is the monitor most widely used across Savills' offices. The 23” LCD is an energy efficient monitor that has been designed with office environments in mind.  With a design and features that deliver improved visual ergonomics and energy savings, the EV2316W is a great fit for back offices, small offices, and control rooms needing a monitor that is easy on the eyes and keeps running costs in check.

The newly launched EIZO FlexScan EV2450 is a 23.8” full HD LCD monitor that is both nice to look at and even better to use, the perfect solution for the new Savills HQ! The monitor features a new “Fusion” design that combines all of EIZO’s own EcoView technologies for reduced power consumption and improved visual ergonomics inside an extremely compact cabinet allowing it to suit all modern office designs. 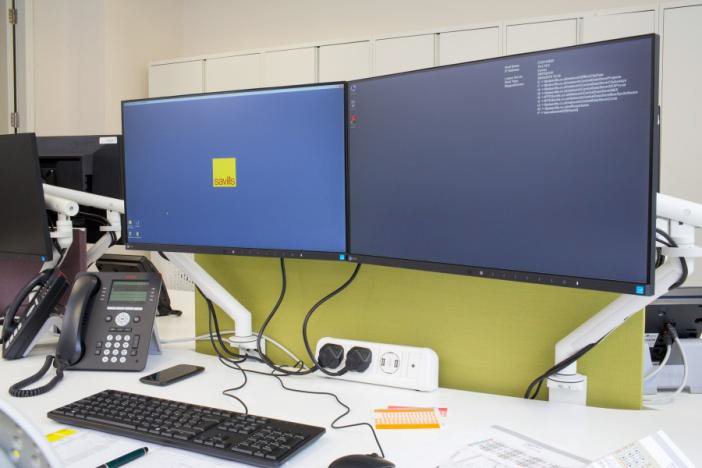 "EcoView" embodies EIZO's concept of combining ergonomic and environmental features for an economical result. The EcoView EV2316W and EV2450 chosen by Savills include environmentally friendly features such as LED backlights, which unlike conventional CCFL backlights, contain no mercury. LEDs also require less power, consuming just 16 watts during normal operation. When the monitor's power save mode and off timer function are set, the monitors consume less than 0.1 watts of power, and when turned off via the main power switch, consume no electricity at all.

The EcoView monitors are also produced with components which are partially made with recycled plastic.

Savills' EIZO monitors are covered by an industry leading 5 years warranty, helping to lower the TCO.