What is the Optimal Display for Watching Video? - The OLED Revolution

When looking for a new display, you may notice the newest option on the market: OLED, or organic light-emitting diodes. What makes OLED displays different from conventional LCD displays? What are the advantages and disadvantages? Let’s take a closer look at the technology.

A revolution is underway in PC, TV, and smartphone displays. There are increasingly more devices using OLED panels, alongside the LCD panels that have dominated the display industry for many years.

OLED displays have been available for a few years now, first in high-end smartphones and some large TVs. More recently, a variety of new products have come onto the market, including several notebook PCs with OLED panels, and monitors such as the EIZO’s own FORIS NOVA, which is designed to be the ultimate display for watching video. 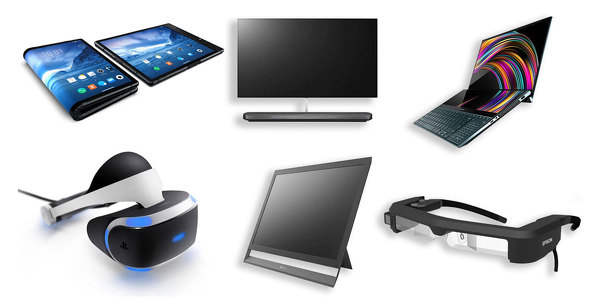 A wave of products featuring OLED panels has hit the market, from large-screen TVs to notebook PCs and smartphones.

One of the most striking benefits of OLED panels is their ability to render pure, deep black, even when there’s stark contrast between light and dark onscreen. OLEDs also have outstanding response time and viewing angles, and the displays themselves can be made even thinner and lighter, too.

However, OLEDs do have some of their own drawbacks. For instance, depending on how they are used, they can experience issues similar to burn-in. We will explore how OLED displays work, and their advantages, as well as cover the technologies used to prevent issues and encourage long product life. First, let’s take a closer look at the history of displays to date. This may prove useful when you go to choose a new display!

The History of Displays, from CRT to LCD, and the Arrival of OLED

The first display devices used for electronic equipment were cathode-ray tubes, or CRTs. These would fire three electron beams at red, green, and blue phosphors on the inside of the screen, causing them to light up and display the desired pixels. Electricity and magnets were used to move (or “deflect”) the electron beam, rapidly sweeping it across the screen (or “scanning”) and lighting up pixels row by row, creating an image.

On a fundamental level, the technology required ample space from front to back, making them very bulky, so making large-screen CRTs was a hard task. There were also other issues, such as image inconsistencies across the screen. For these reasons and more, CRTs were largely phased out by the end of the 2000s.

The end of the age of CRTs coincided with the rise of liquid crystal displays, or LCDs. Compared to CRTs, the LCD panels used in these new monitors and TVs were far thinner, and much easier to manufacture in large sizes. The market rapidly transitioned from bulky, heavy CRTs that were rarely larger than about 30" to thin, flat LCDs that were 50", 60", or even larger.

Another major advantage LCDs boast over CRTs is their high-precision, high-density image rendition. Standard CRT TVs and monitors ran at resolutions of 640 x 480 to 1600 x 1200 or so, whereas LCDs have only continued to evolve since their introduction, reaching ever-higher resolutions nowadays like 4K and 8K.

LCDs were undeniably a major innovation in the display world and remain the standard type of displays used today. They are a mature, reliable technology, widely used for video production, creative work like animation and video game development, medical diagnosis, and other applications where display quality is a high priority. They have had a huge and lasting impact on lifestyle and will surely continue to be used long into the future.

Left: The FlexScan T965, a CRT monitor. Right: The FlexScan EV2430-GY, an LCD monitor.
This thin, flat design would never have been possible with a CRT.

Incidentally, do you know how LCDs actually display images? LCDs are display devices, but they themselves do not emit any light — in order to show images with LCDs, it’s necessary to illuminate them from behind, with what is known as a backlight. The light from the backlight is adjusted by the LCD’s shutters, passing through red, green, and blue color filters to create a full-color image. As a result, the evolution of backlights, including brighter backlights and the transition to LED backlighting, has also contributed significantly to the evolution of LCDs.

LCDs have their own fundamental weaknesses, but over time, various technological innovations have been developed to effectively make up for these: narrow viewing angles have been addressed with the development of IPS technology (“in-plane switching,” which arranges the liquid crystal molecules parallel to the glass plates). Afterimages have been reduced through overdrive (briefly increasing the voltage to pixels) or doubled refresh rates. Contrast has improved through local dimming (using LED backlights divided into sections, and controlling the brightness of each section individually).

LCDs are mature, durable, and great for displaying still images, and there is still room for further growth. As mentioned at the start of this article, OLEDs are the latest new option to appear. OLED panels outperform LCDs when it comes to video rendition: their wide viewing angles and high-contrast display capabilities are far beyond what LCDs can achieve, and OLEDs can achieve far deeper, richer blacks than LCDs. OLEDs also offer fundamentally fast response times — another reason why there are high expectations surrounding OLED displays for watching video.

What Are OLEDs and How Do They Achieve Deep Blacks? 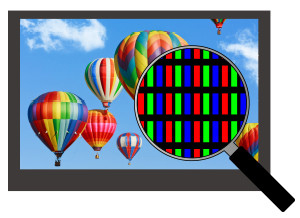 The biggest difference between OLEDs and LCDs is that OLEDs themselves emit light: the OLEDs that make up each pixel (subpixels) light up in their respective colors, eliminating the need for backlighting or color filters, and enabling thinner designs. This also means that, because black is displayed by simply turning off those OLEDs, these displays can show pure black.

In comparison, LCD monitors use the LCD panel as shutters for the backlight: the light from the backlight is adjusted by the shutters, controlling the intensity of the light to show various colors. By their nature, LCD monitors need backlights and color filters, so there are limits to how thin they can be. LCDs are also unable to fully block out the light produced by the backlight, which leads to light leakage and muddy black on dark images like nighttime scenery. 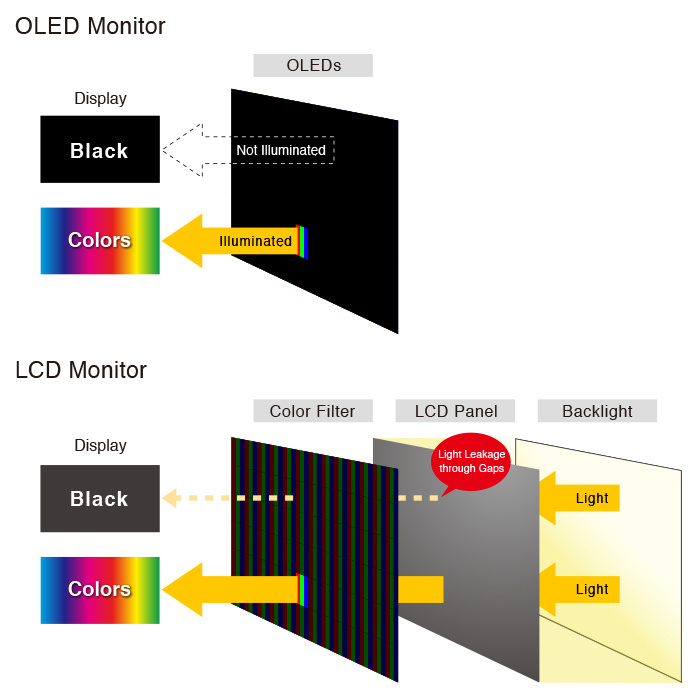 How different types of monitors show black. Above: OLED monitors fully control the light produced by each pixel, enabling the display of pure black. Below: On the other hand, LCD monitors are unable to fully block out the light from the backlight, leading to a more washed out black.

There are technologies to improve the contrast in conventional LCD monitors, such as local dimming, which divides the backlight into sections and controls brightness on a per-section basis, but they do not compare to OLEDs’ ability to fully control the light output pixel by pixel. In practice, this means that OLED-based products like the EIZO FORIS NOVA can achieve a contrast ratio of 1,000,000:1, while PC monitors with IPS LCDs generally have a contrast ratio of about 1,000:1 — a thousand-fold improvement in contrast ratio.

Another benefit of directly controlling the light output is improved response time. LCD panels act as shutters that control the amount of light that passes through them, using different voltages to adjust the angles of the liquid crystal molecules inside. As a result, OLEDs have the major advantage of fundamentally faster response times. The actual response times will vary by product, but the FORIS NOVA, for example, has an extraordinarily fast response time of just 0.04 ms. Compare this to LCD monitors: ordinary LCDs have response times that range from a few ms to 10+ ms, and even gaming monitors optimized for response time over image quality generally have response times in the 0.3–0.6 ms range. The difference is staggering.

Are OLEDs Always the Right Choice? What are the Downsides?

For some time, the relatively short lifespan of OLEDs has been a known weakness of OLED displays, though in recent years, they have improved to the point where they are now practical for ordinary use. Individual OLED pixels will gradually degrade over time when under high load operation (i.e. when brightly lit), so if a still image is shown for a long period of time, this will lead to uneven degradation between low-load and high-load pixels. Depending on how the display is used, this uneven degradation can cause effects similar to burn-in, and unlike LCD burn-in, OLED burn-in is irreversible.

Example of the pixel degradation effects of displaying a test pattern for a long time, causing extreme load to a portion of the display

There are two main methods used to avoid or mitigate this issue. The first is limiting brightness: when showing a bright image across the whole screen, the display can automatically reduce the brightness to limit the load on the OLED pixels. The other is pixel shift, which slightly moves the entire image by a certain number of pixels to prevent pixels from displaying the same image for too long of a period.

In addition to these countermeasures handled by the displays themselves, there are also some simple things users can do to extend the lifespan of OLEDs: turning off the TV or monitor when you are not using it, and setting up a screen saver, are especially recommended. Screen savers were originally intended to prevent CRTs from experiencing burn-in, and even today, they remain a standard feature on computers, video game consoles like the PlayStation 4, and set-top boxes like the Apple TV and Amazon Fire TV series.

OLED displays have the fundamental advantage of being able to show pure black because each pixel lights up individually, making them excellent for reproducing subtle gradations in images with significant contrast between bright and dark. They also offer wide viewing angles, wide color gamuts, and outstanding response time. To date, no other display devices have been able to offer such beautifully immersive image rendition.

In recent years, there has been an explosion in HDR content produced with the expectation of greater dynamic range in brightness and wide color gamuts, including movies available on 4K Ultra HD Blu-ray, 4K HDR video games and Netflix content, and more. OLED displays are optimal for enjoying this content, bringing out its full potential and creating an even more immersive experience. We hope you will bear these points in mind to get the most out of your OLED display for an exciting new way to enjoy video entertainment. 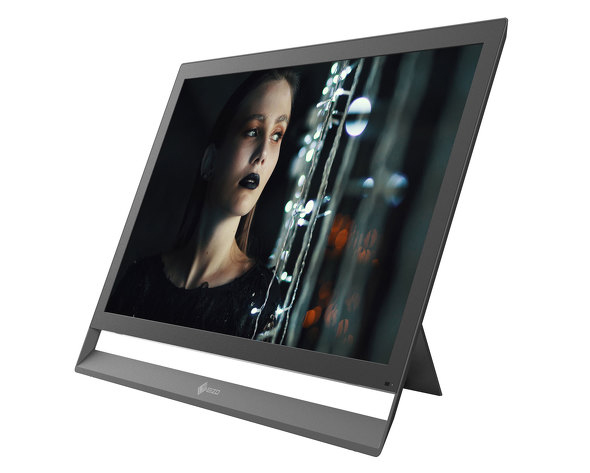