Berlin-based photographer Tomaso Baldessarini spent four weeks walking the streets of the New York borough for his book titled “28MM – Edition Manhattan.” Baldessarini drew on some 10,000 photos in creating an impressive, 352-page coffee-table book that he both self-produced and self-published. The EIZO ColorEdge CG2730 played a key role in the postproduction and soft-proofing processes.

New York has served as a backdrop for generations of photographers. And that should come as little surprise: The city has magically drawn people by the scores for centuries. Berlin-based Tomaso Baldessarini was also unable to resist the city’s appeal.

Baldessarini, 32, had previously gained recognition chiefly as an award-winning portrait photographer who prefers to work in large-scale projects with one central theme. As time went on, the urge to leave the safe confines of the studio continued to grow. “When working in a studio, you have a team, you can immediately check the photos and make adjustments if the results are not to your liking, and you have full control over the lighting and the models. After a few years, you are severely restricted in terms of your artistic horizons,” says the university-trained photographer in expressing his concerns. 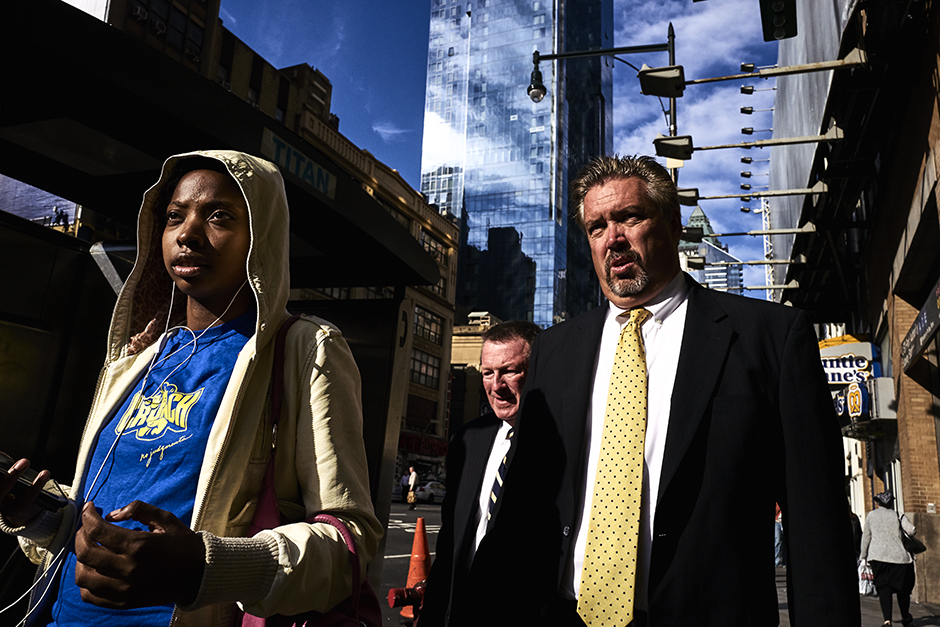 New York: Glamour and the American Way of Life

Baldessarini listened to the advice of a friend and fellow photographer, who told him to step outside of his comfort zone: “Just do it. Try something new and see what happens.” In the autumn of 2016 Baldessarini made his way to New York, a city that symbolizes wealth and modernity and has proved a draw to millions who come to it to experience and photograph its glamour and the American way of life.

Baldessarini’s plan was to spend a month in the dynamic heart of New York located between the Hudson and East Rivers: Manhattan. He sought to get as close as possible to the people who live there and capture them in an authentic and honest light. All the equipment Baldessarini needed was a Leica Q. “The camera’s fixed wide-angle 28-mm lens forced me to change my approach, overcome my inhibitions, and get up close to my subjects,” said Baldessarini in describing the process of creating the book. “I played the role of passive observer, letting the scene, the moment, and the people I was photographing take over. New York is a city of stark contrasts, where incredible moments can occur in the fraction of a second. You will miss out on the best shots if you only see the world through a viewfinder.” 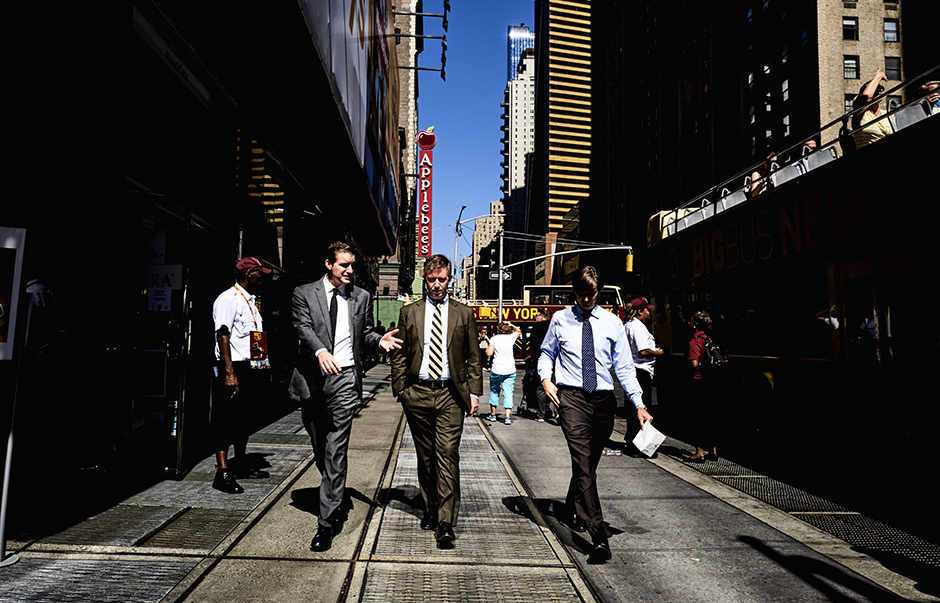 Capturing the Special Moments When They Happen

It was just these magic moments that Baldessarini wanted to capture up close. He sought to blend in with his surroundings. Baldessarini got a sense for the city, studied the locations for his shoots, and dressed in black to avoid standing out. He spent an average of ten hours a day wandering the streets of Manhattan, during which he covered over ten kilometers. He always had the compact Leica in hand, with the camera manually pre-focused to one meter, the f-stop set to between 8 and 11, and exposure times kept to a minimum. He went where his feet took him and waited for just the right moment to capture the scene. The oppressive humidity and sweltering heat of New York in late summer really pushed Baldessarini to his limits. The reward was the photos, which are both extremely authentic and candidly honest. 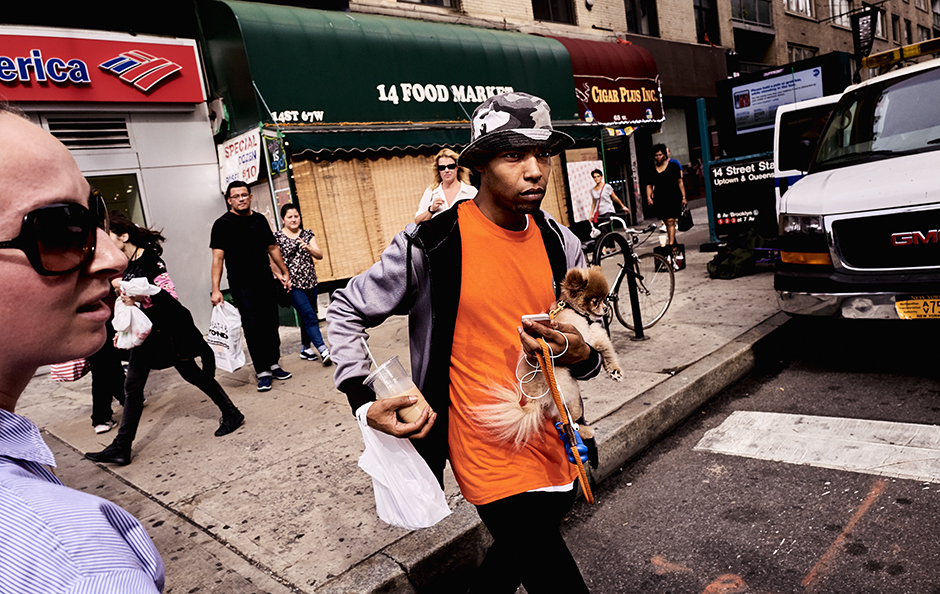 Baldessarini’s plan began to take shape. It calls for four books, one each devoted to Manhattan, Brooklyn, Harlem, and the Bronx, respectively. Once the four weeks were up, he headed back to Berlin with 10,000 photos in hand, exhausted but happy. The result is a social documentary that avoids tired clichés. It portrays the many sides of his subjects – be they eccentric, frail, resigned, or full of vigor – that also reflect the city itself.

Baldessarini and Bianca Winter, who curated the book, spent the next three months narrowing down the photos to 1,000 and then ultimately 450. These were then printed in two hard days of work to establish the central theme of the coffee-table book. “It was fascinating to see how printing the photos and allowing myself the time to gain a new perspective on my work opened up unexpected possibilities: People, colors, and patterns were to come together bit by bit to create a unified narrative,” he says in explaining his work with Bianca Winter. Baldessarini strongly believes that “the photos speak for themselves. The people in them tell their stories without the need for words.” 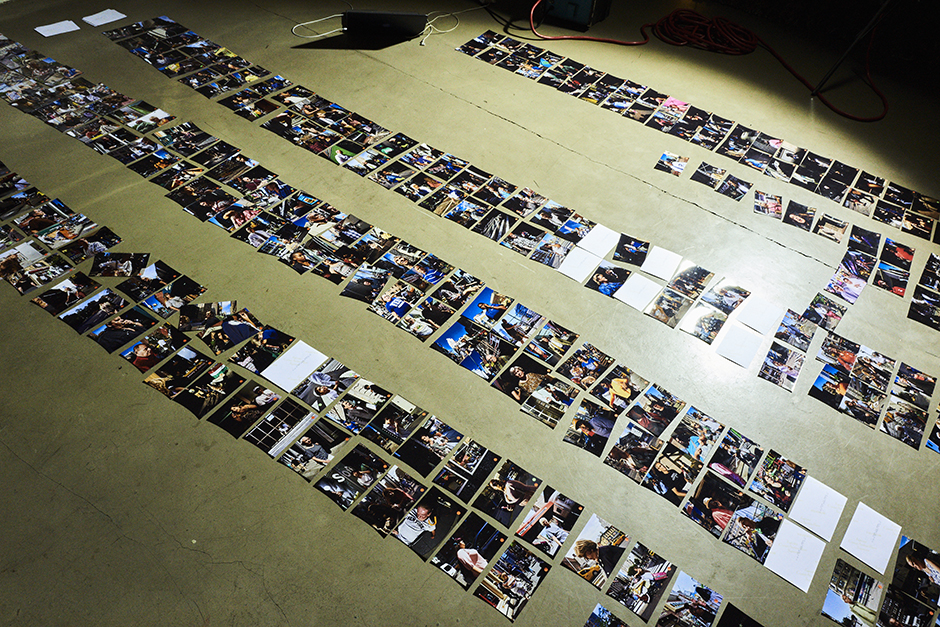 While the book of photography was starting to take on form, Baldessarini had to make the key decision of whether to work with a publisher, as originally planned, or whether to self-publish his first coffee-table book. Although Baldessarini did meet with a number of publishing houses and received multiple offers, he ultimately decided to go it alone: “Many publishers simply transfer the financial risk to the young artist. They earn money while the artists are at best able to cover their costs – or end up bearing all the costs themselves if worse comes to worst.” That is how he describes the sobering reality of the publishing business.

And it is also why Baldessarini opted to self-publish the book, and it is why he sees the whole project as a learning experience: “I always do the post production work myself since I feel this is necessary in order to be able to properly realize my vision. Photography is extremely subjective, which is why the photographer needs to maintain full control over the process. In addition to everything else, I will also be doing the layout and marketing.”

Baldessarini does 90% of his photo-editing work in Capture One and 10% in Photoshop. He is one of the first photographers to work with the new ColorEdge CG2730 monitor from EIZO. “While the pictures always look great on my Apple monitors, they are often too sharp, too vivid, and too contrasty. That means I do not receive a realistic impression of how the image will actually look,” he says in explaining his decision. “That is the reason why I use hardware-calibrated graphics monitors from EIZO. The ICC profile from the print shop allows me to see in the soft-proofing view how the photos will look after they are printed. I was able to test out the EIZO ColorEdge CG2730 before it was even launched, and I am extremely happy with it. It’s a professional monitor fully capable of meeting the highest of standards.”

Baldessarini searched for the perfect paper for the job in the print shop, and he was able to decide on every last detail of the book. As he well knows: “The advantage is that I am not bound to the publisher’s guidelines.” On the downside, he cannot take advantage of their distribution network. “There are, however, other lucrative distribution channels opened up by social media,” Tomaso Baldessarini says with confidence.

Baldessarini is currently working on his next book on drag queens, to be titled “Queens”, with publication set for the summer of 2017. He is planning to return to the U.S. for three months at the end of the year to shoot his first documentary film as well. 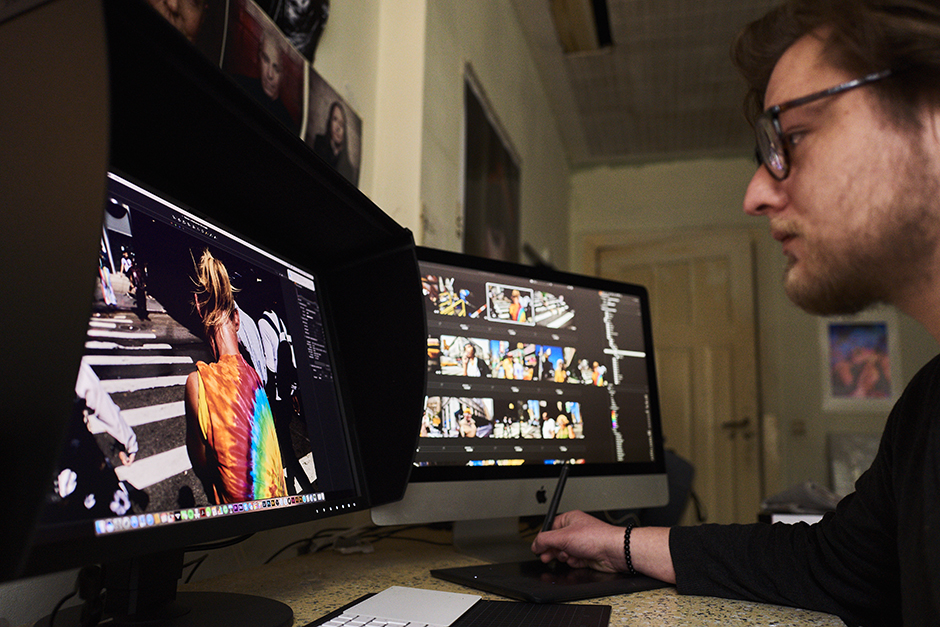 The freelance photographer earned his BA in 2012 from the University of Applied Sciences Europe in Berlin (BTK), where he specialized in photography. Since completing his studies, he has remained in Berlin and worked as a digital operator, retoucher, and photographer, most recently in the fields of commercial and art photography. The Phase One ambassador is represented by the Kelly Kellerhoff Agency. His work has been published in a number of newspapers and magazines, including Die Welt, Die Zeit, Rolling Stone, and Vice. He was also the recipient of the 2016 International Photography Award presented by the Lucie Foundation, and took top place in the 2016 PX3 Competition. His works have been shown at group exhibitions in New York and Wisconsin as well as at a solo show at the Blond and Blond Gallery in Berlin in 2015 as part of the Anti.Mono Stereo series. 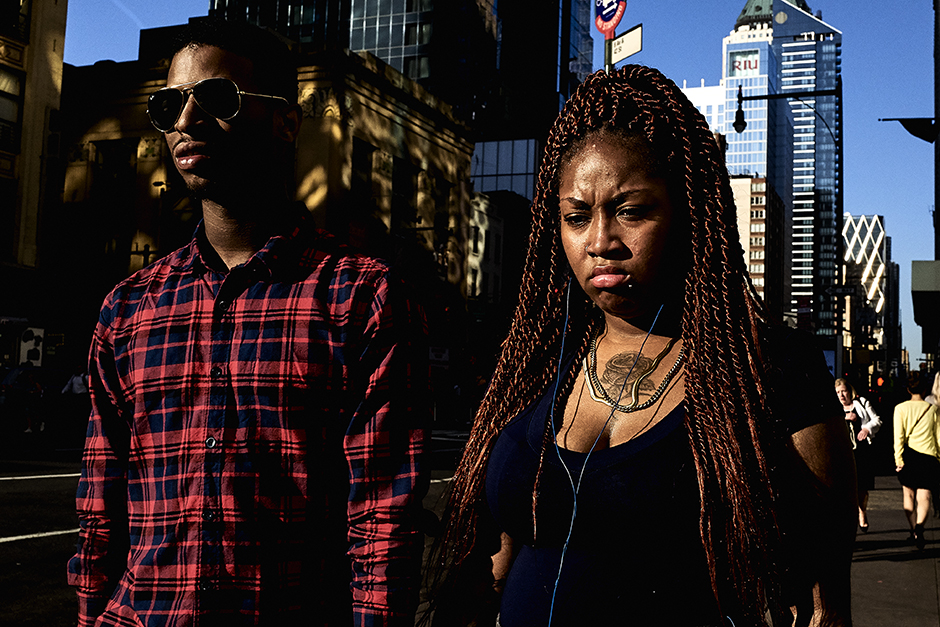