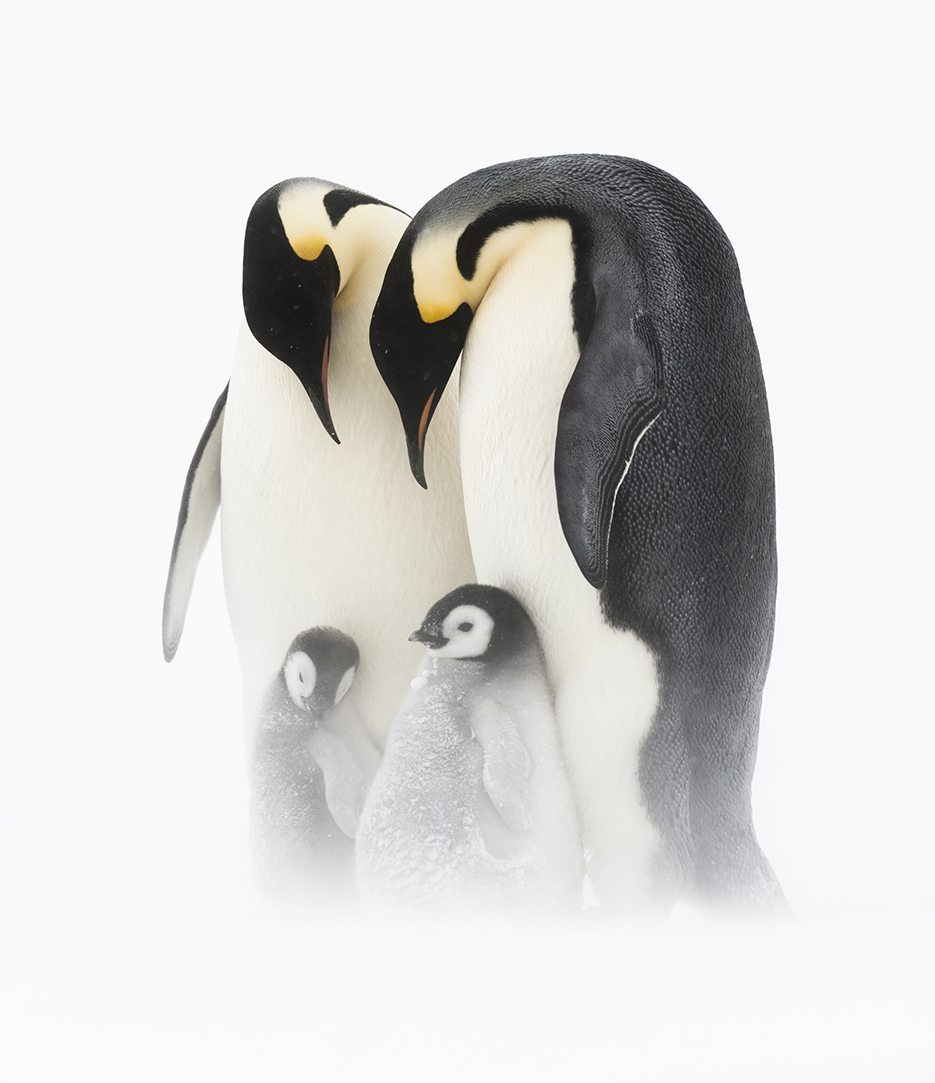 For Stefan Christmann, a keen nature photographer who holds a degree in physics, spending a year in wintry Antarctica back in 2012 did not merely serve as an opportunity to carry out research, but also as one to take thousands of stunning photos. His spectacular shots of the cyclical annual behavior of emperor penguins in particular landed him a spot returning to those inhospitable climes. This time around, he is travelling as a member of a BBC film crew, along with companions including the new EIZO ColorEdge CG2730 monitor.

Drawing on the experiences he gained staying at the Neumayer III research station a few years back as well as through his own work as a photographer, Christmann is simultaneously serving as the expedition photographer, camera assistant, and safety officer for the three-member film crew. The project they are taking part in, which launched in December 2016 and will run until November 2017, documents the lives of emperor penguins in the Antarctic on behalf of the BBC’s Natural History Unit. Christmann is handling a number of tasks involved in the project: As the expedition photographer, he takes stills and set photos that will later be used as advertising material for the completed film. As the camera assistant, he supports the cameraman in transporting, setting up, and, when necessary, servicing the heavy, unwieldy film production equipment. Finally, as the safety officer, his duties include deciding whether a given location and the (expected) weather conditions there are safe enough for filming. After all, during his previous wintertime stay in the Antarctic, Christmann got to know both the thrilling sides of the region as well as the aspects that make it a dangerous place to live and work.

Prior to departing for the South Pole, Christmann and his teammates completed a meticulous planning phase – it was clear to all parties involved that, once the crew had reached their destination, they would no longer be able to leave the continent for nine months due to climactic conditions. This meant that logistics in particular posed a great challenge. According to Christmann, “You need to decide what you want to use in that year, because once you’re there, there aren’t any opportunities to get new equipment – even if something breaks under the extreme conditions there. The team ultimately packed a Nikon D810 and D500 (an FX and a DX body), as well as a selection of lenses and converters that Christmann could use as alternatives to achieve similar image results even in the event of an equipment breakdown. He and his team selected the EIZO ColorEdge CG2730 monitor for image processing. On-site in Antarctica, photographic work always depends on the weather. According to Christmann, the temperature is not the most limiting factor; the wind is. With that in mind, each working day down on the South Pole begins with an evaluation of all weather conditions. If the weather looks good, the team transports the equipment to the shooting location via snowmobiles and pulks (a type of toboggan used in Nordic countries). The delicate equipment is transported inside wooden boxes constructed by the team that thoroughly protect it from shocks and vibrations. Once the crew has arrived at the filming location, they often only have a few minutes of time for the actual filming and photography work “since,” as Christmann explains, “during the winter there are weeks in which the sun rises in the north and then sets in the north an hour later.” 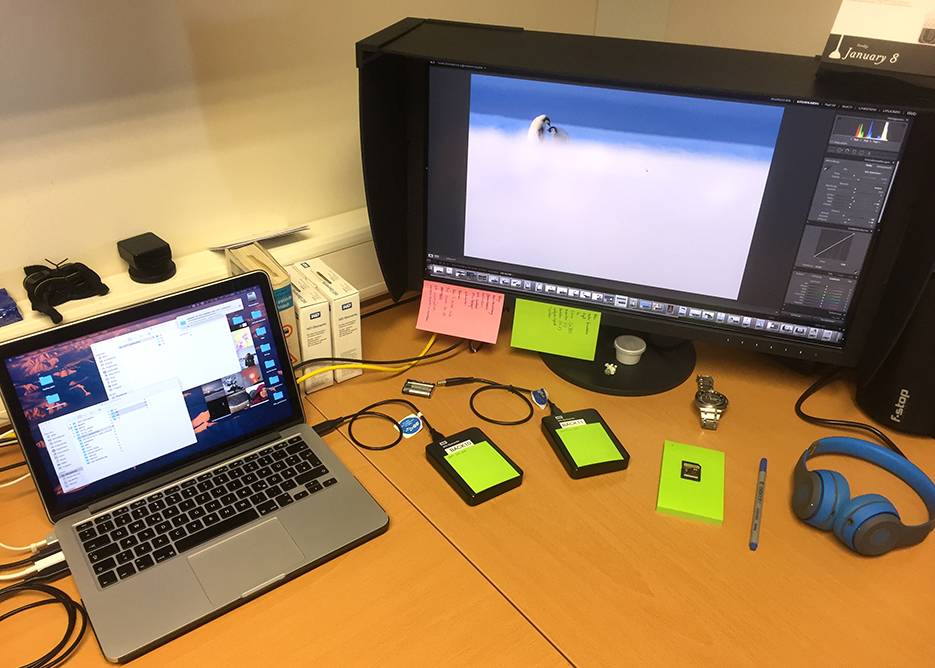 When working outdoors in the Antarctic, weather and lighting conditions aren’t the only factors that need to be taken into close consideration; maintaining the functionality of the equipment also poses a significant challenge. For example, moving parts such as lens apertures become very stiff under the extreme environmental conditions on-site, which can lead to undesired overexposure. Meanwhile, eyepieces can instantly freeze if team members exhale onto them. Moreover, the team needs to use their equipment to create an unusual visual idiom for their work, since emperor penguins spend most of their time standing around in a wide, white, and flat landscape that doesn’t provide any fodder for conventional photo foregrounds, midgrounds, and backgrounds. When the team succeeds in defying all these circumstantial hardships, they are rewarded for their toil with plentiful shots of moments “that I feel privileged to experience, and which I will never forget,” says Christmann. 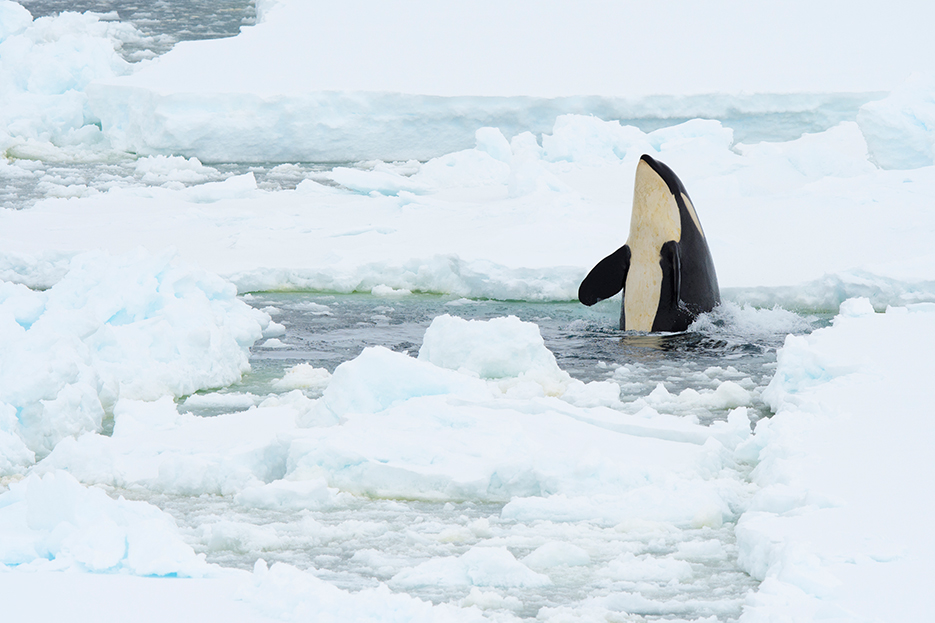 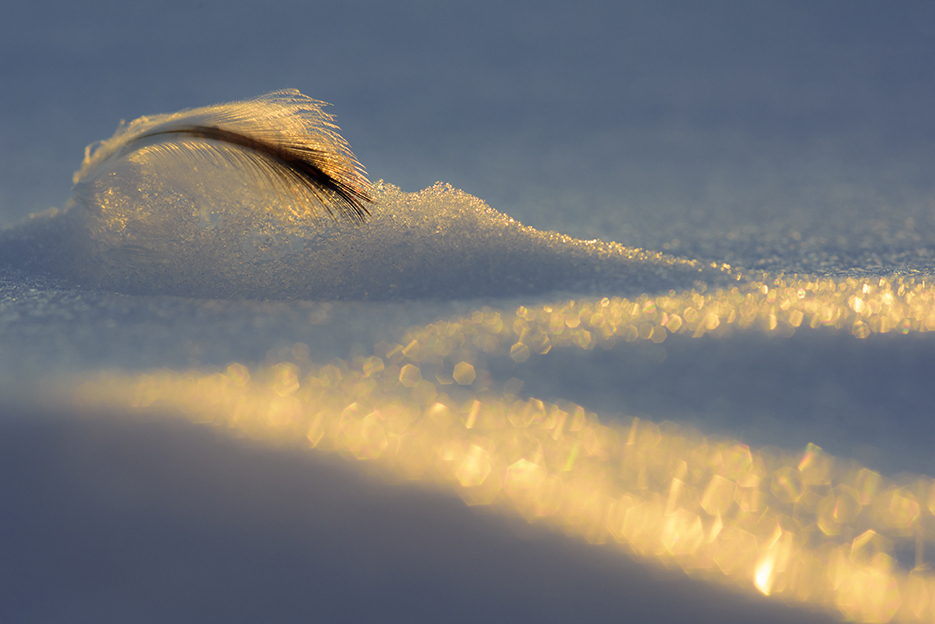 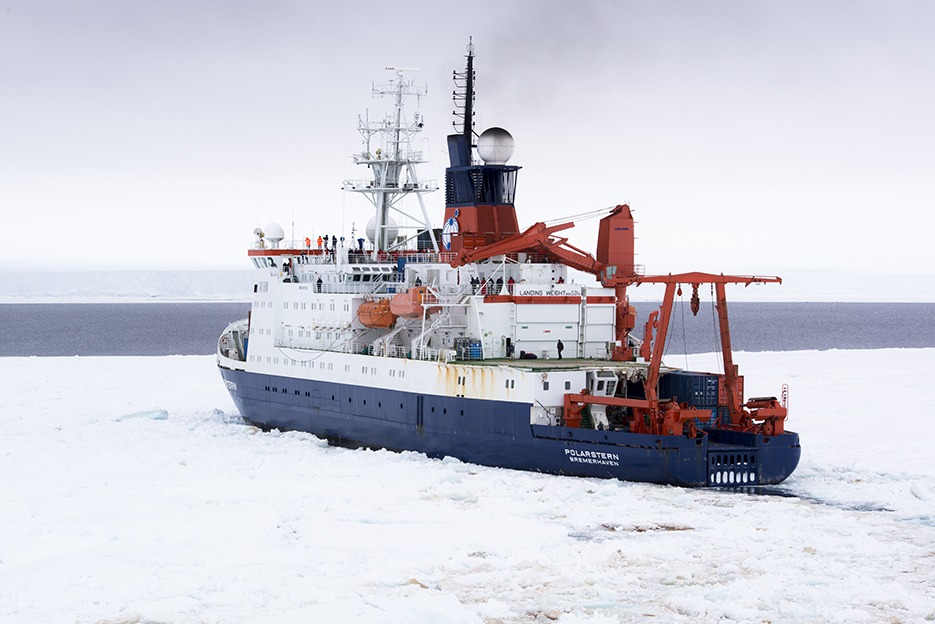 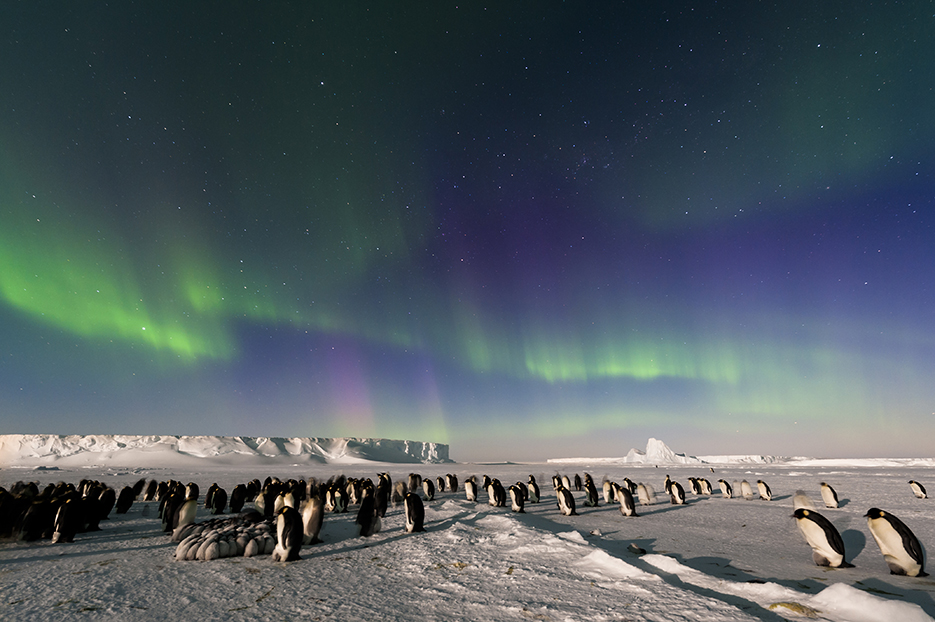 An interview with Stefan Christmann

How does one prepare for a stay in the Antarctic?

Every year, the Alfred Wegener Institute sends nine researchers to spend the winter in the Antarctic, where the organization has been carrying out ongoing series of measurements for over 30 years. These researchers pass through a sophisticated preparatory program that includes mountaineering courses through ice and snow in the Alps, as well as fire safety courses. I also exercised a lot to build up my strength and endurance. The filming equipment is very heavy, and since we don’t have a team to carry it for us, we need to do that ourselves. Moreover, you have to meticulously plan what you’re taking along with you. You can’t buy anything in the Antarctic, and you can’t have anything delivered to you there either, because the ship routes freeze over and become impassable. That means mundane issues such as running out of toothpaste or contact lens solution can become real problems.

In your opinion, would an expert monitor number among the items that are indispensable for working in the Antarctic? 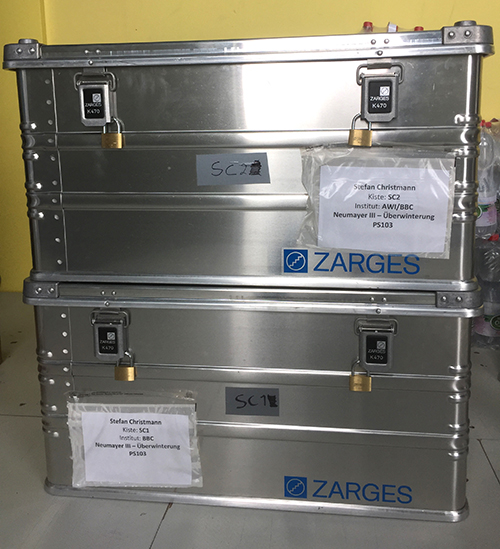 Certainly. Transporting it there was a challenge, though, since we had to pack our equipment and personal items into Zarges-brand aluminum boxes months before departure. During the ride over, those boxes sat on the deck of a large icebreaker (the RS Polar Star), and were subjected to the various temperature highs and lows while passing through the world’s various climate zones. This means that delicate items need to be especially well packed and thermally insulated. Moreover, the aluminum boxes themselves pose some limitations, since not everything fits into them perfectly. Unfortunately, I wasn’t able to simply use the original EIZO outer packaging; instead, I had to improvise with my own packaging. That worked well, though, primarily because the EIZO monitors are so incredibly robust and deliver such great processing quality.

Was all that effort worthwhile?

While I must admit that I’m normally a big fan of retina and high PPI displays, I can answer that question with an unreserved ‘Yes.’ My original concern that the monitor wouldn’t be able to meet my expectations in terms of resolution was immediately dispelled on-site. The CG2730 still boasts 110 ppi at 2560 x 1440 pixels and a diagonal of 27 inches. That fully suffices for this monitor size at a normal viewing distance. Moreover, the device impresses with a maximum luminance of an impressive 350 cd/m2. I found that very helpful, especially during the Antarctic summer, which entails endless days of unrelenting sunshine. To sum it up, my initial fears have given way to total enthusiasm.

There are certainly other reasons for your enthusiasm, aren’t there?

Of course. For example, the wide gamut and the monitor’s high color resolution. It covers approximately 99 percent of the Adobe RGB color space. That’s particularly important for me, because I work with highly saturated colors on a very frequent basis. Many people underestimate the full range of colors included in the Antarctic landscape; on nights when the polar lights are showing, for instance, you can see very highly saturated green hues, to say nothing of the extremely saturated red sunrises and sunsets, as well as the countless blue shades of the ice. The CG2730 displays 1024 levels of brightness for each color channel, thanks to its 10-bit color reproduction. That allows me to recognize and bring out even the slightest differences between colors. For the first time, I feel like I can really do the subtle differences between individual color nuances justice. Now, it’s virtually impossible to see tonal breaks in a specular sunset sky ranging from orange to dark blue, and photographing the special light has become a real pleasure, whereas it used to be a headache. And when it comes to specifically photographing emperor penguins, the image quality I achieve with the EIZO monitor benefits tremendously from the IPS true black panel. This panel ensures color reproduction that is largely independent of the viewing angle. It also allows the device to display truly dark black shades. From light to dark, the monitor impresses me along the entire gamut. 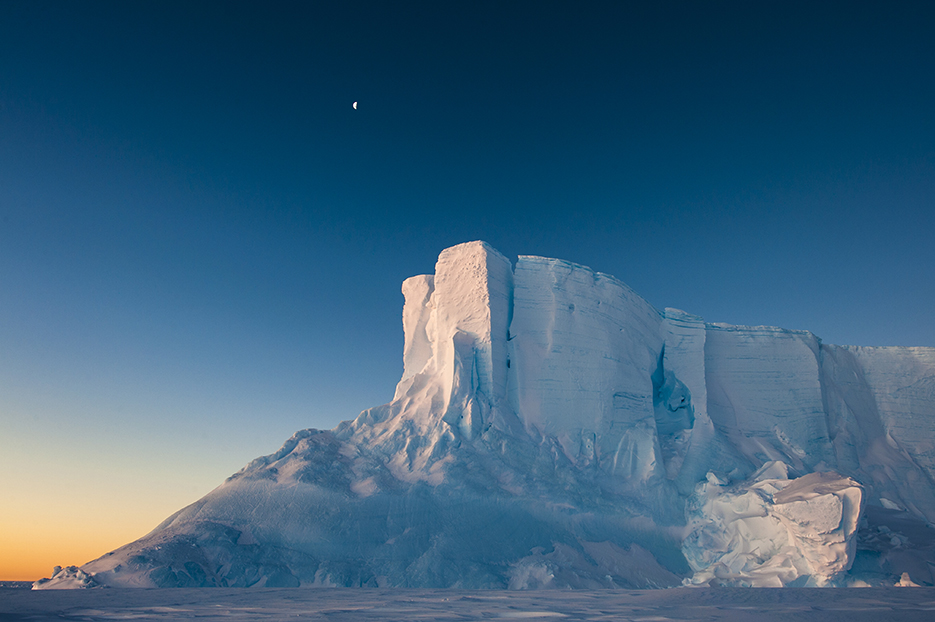 Are you also prepared for the worst-case scenario: the possibility that the monitor might break down?

I know that EIZO is extremely committed to ensuring the processing quality of its monitors. EIZO conducts comprehensive quality checks to ensure that every single monitor that leaves the factory in Japan has been checked and calibrated for perfect functionality. Since I come from a scientific background that involved spending a lot of time in production facilities, I know from my own experience how time-consuming and expensive quality inspection processes are. However, given where I’m using the monitor, paying for finished products that have undergone that degree of testing is well worth the cost. I know that the monitor I brought along on my expedition was inspected from head to toe before shipping and that it works perfectly. That insures against the probability of a breakdown during the Antarctic winter to the greatest possible extent. All that being said, transport to the Antarctic alone incurs so many risks that even the best manufacturers can’t influence, which is why, just to stay on the safe side, I also brought along a second CG2730.