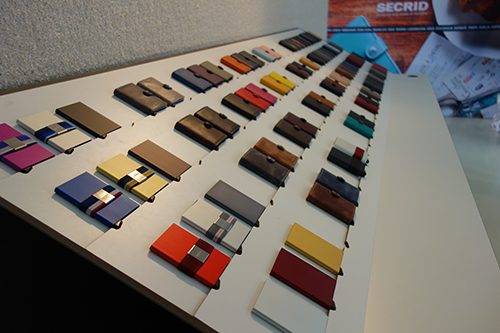 The founders realized that consumers were not happy with how unsuitable their wallets were for holding the increasing number of cards they were carrying. This was their inspiration to develop the first cardholder - the Bodycard - in 1997.

On January 1, 2009, they decided to fully focus on their own product line - under the brand name Secrid - based entirely on their own vision. They have used all their knowledge and experience for the development of “the new cardholder". This has led to the introduction of the Secrid Card Protector. Currently, Secrid has five different types of protectors and wallets in a variety of colors and finishes, such as leather and aluminum. Their products protect both your money and your privacy, in a stylish way.

The company works closely with 40 suppliers; from the sewing workshop in Vlaardingen to the workshop in Leiden. Products are made in good conditions and with consideration for the environment.

Every day more than 100 people assemble the products with enthusiasm and precision. Most of them work at the workshop in Leiden. All components of the wallets, such as the Card Protector, the bottom and bottom sliding system, come together in Leiden. All tools used by the employees in the workshop, such as the tool to assemble the Card Protector, were created by Secrid, in close consultation with the employees themselves. In the meantime, Secrid has created more than two hundred Dutch jobs.

Secrid has its office in The Hague, in the old Caballero factory.

EIZO screens are used at every workplace in the company. Most workstations consist of a dual-screen setup with two EV2450s. In addition, they also use privacy filters for the protection of sensitive and confidential information in the finance and HR departments.

“The monitor has nice slim bezels, and a beautiful finish. It meets all technical specifications and the image is also very steady and clear.” Thomas Boogert, ERP & ICT manager

Thomas Boogert, ERP & ICT manager, got the assignment two years ago to provide the workplaces with new displays. The choice for EIZO was very simple. In the past, they used iMacs, but the new workplaces had to be equipped with two displays. 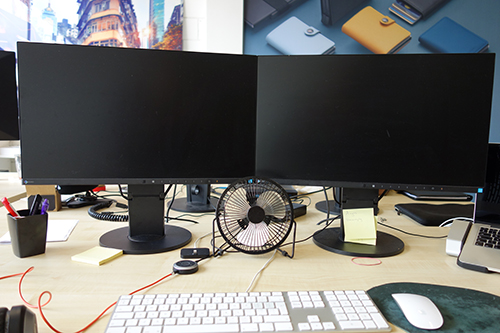 “Often orders were printed, placed on the desk and the information was typed into the system. It’s a waste of paper, it's not ergonomic and it takes too much time. Hence the choice for two screens”, explains Thomas. “The following question was: which monitors?”

They chose 24 inch monitors, as this format offers a perfectly workable surface and full HD resolution.

After ordering two random screens online, Secrid quickly concluded that the design and finish were disappointing. The monitors did not match the look and feel of the office and were immediately rejected. The next step was to search some terms on Google, such as 'best monitor' and 'high-end monitor' with the idea that product developers had thought about features that Thomas had never thought about himself.

His search results led him to EIZO and he ordered two FlexScan EV2450s. The design was approved immediately. “The monitor has nice, slim bezels, has a beautiful finish and meets all technical specifications. The image is also very steady and clear. The employees are working 8 to 10 hours behind the screens and you never hear anyone complaining about headaches or tired eyes.”

Thomas adds: “Ultimately you pick the fruits of a slightly more expensive choice, because the product is better. There is always something lacking when you buy a cheap product.”