Ulla Lohmann won the ‘Jugend forscht’ (‘youth researches’) competition at the age of 18. She used the prize money to take a trip around the world. Now age 40, she still hasn’t stopped travelling.

Ulla Lohmann is currently based in the Bavarian municipality of Schäftlarn, Germany. However, the successful photographer and filmmaker spends over a third of the year away from home. The fruits of her expeditions and experiences are regularly published in magazines such as National Geographic and Geo. 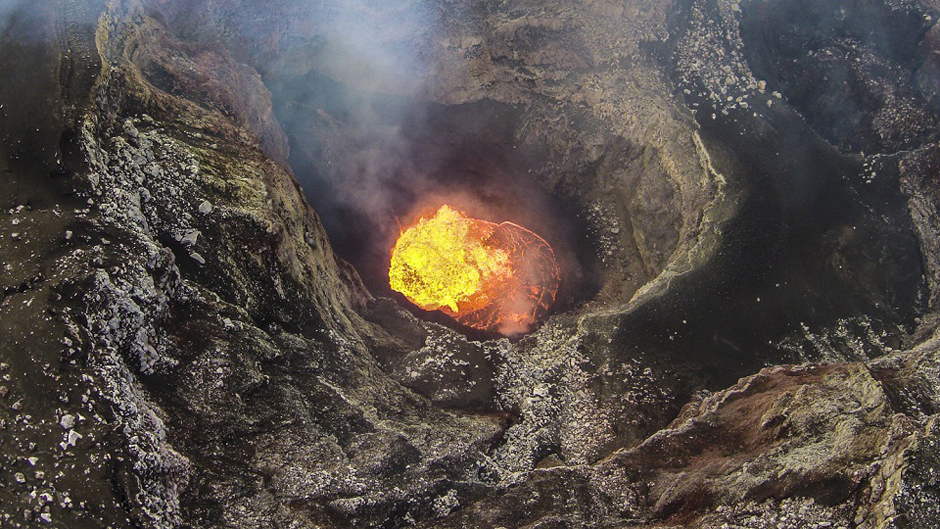 She is currently travelling Europe with her husband, Basti, and their young son, Manuk. They have pledged to climb the highest mountain in each of the 47 countries on the European continent – within the space of 470 days. Along the way, the charismatic storyteller is capturing numerous photos, videos and 360° images on each mountain.

Volcanism represents another focal point of her photographic work. Lohmann has been enthralled by this topic for many years – ever since she visited the ruins of Pompeii with her parents as an eight-year-old, when she got a first glimpse of the destructive power of a volcano. It was not until quite some time later, though, that the adventurous photographer became one of the first people ever to stand at the edge of a boiling sea of lava at the Benbow volcanic cone on the island of Ambrym. Lohmann first broached the edge of this volcanic crater, located in the Pacific archipelago of Vanuatu, in 1999. Far below her, deep in the crater, the liquid lava flowed; from her perch, Lohmann could only glimpse it. She dreamed of descending as far as possible into the crater one day – further than any other human had before – so that she could witness this natural spectacle from up close. 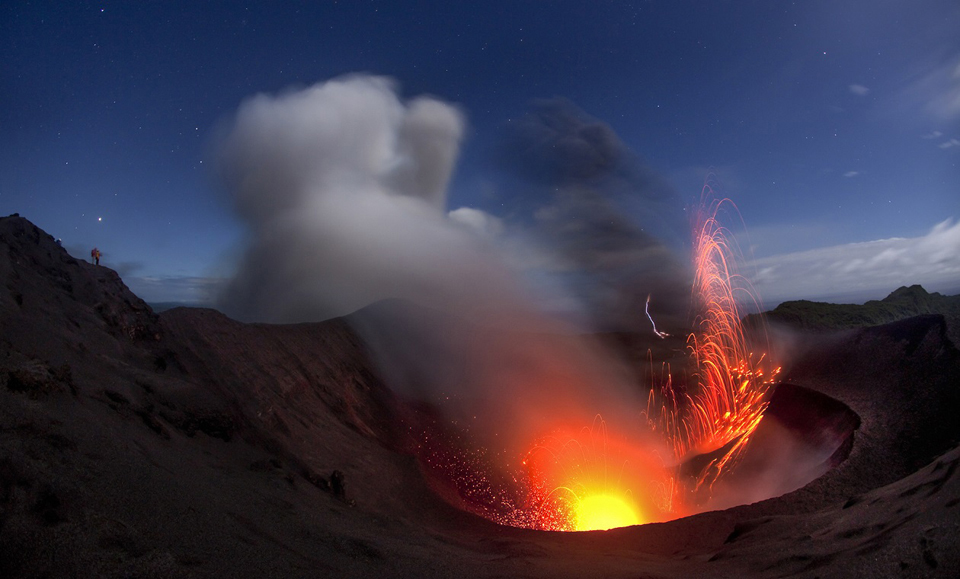 Focusing on the Goal

Lohmann, a dedicated photographer and filmmaker, is nothing if not perseverant, and she pursued this goal with fierce determination. To this end, she joined a National Geographic expedition; initially, as a cook. She went on to study environmental management and photojournalism in Australia and started selling her photojournalistic work. On one of her expeditions, she met and fell and love with Basti Hofman, an Alpine mountaineer. They became a team, and have pursued their goals together from that point on. 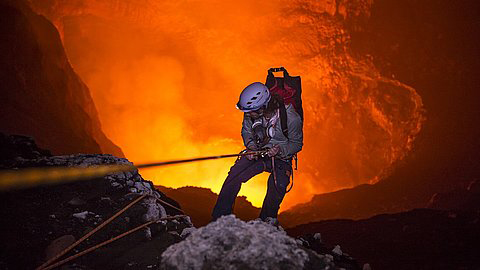 In 2014, Lohmann came extremely close to fulfilling her dream: Together with Basti and the French volcanologist Thomas Boyer, she descended several hundred metres onto the second of three levels in the Benbow crater. However, inopportune rainfall combined with the crater’s volcanic gases to form a corrosive, life-threatening torrent, which threatened to obliterate the carrying capacity of the rope and carabiners that kept Lohmann in place. The expedition was immediately cut short; Lohmann was able to ascend again just in the nick of time. “Those kinds of setbacks are incredibly frustrating. Having to retreat right before you achieve your goal is a tough pill to swallow.”

Her next attempt in 2015 got off to a similarly inauspicious start: The team had to endure over three weeks in protective huts they had assembled at the foot of the volcano as they waited for the seemingly incessant rain to come to a stop. “I feel like a caged animal; the rain is the cage,” wrote Lohmann in her diary at the time. However, shortly before the end of the planned four-week expedition, the skies cleared, and the team was able to risk descent into the crater. 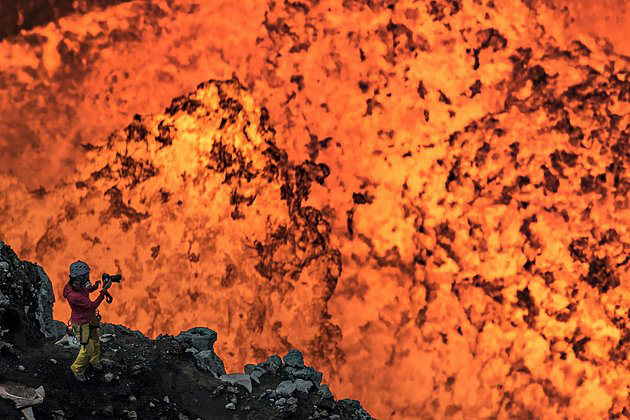 From the crater’s edge, they abseiled the first 150 metres down to the first level. Then, they descended another 110 metres to the second level. This was the point where they had been forced to turn back the year before – but this time, they had better luck: They were able to descend the final 150 metres onto the lowest level. On their way down, they were continually enveloped by toxic gases, and visibility dropped to under ten metres at certain points. Once they had arrived at the bottom, they were rewarded with a view that no other humans had ever enjoyed: A roiling sea of glowing red lava just 50 metres below them, tendrils of which could shoot up to 70 metres high in explosive spurts. Boyer, the volcanologist, measured the surface temperature: It was 1,276 degrees Celsius, 200 degrees more than expected. Lohmann photographed the spectacle, creating breath-taking images. Safely outfitted in heat protection suits, she and Boyer collected lava samples. 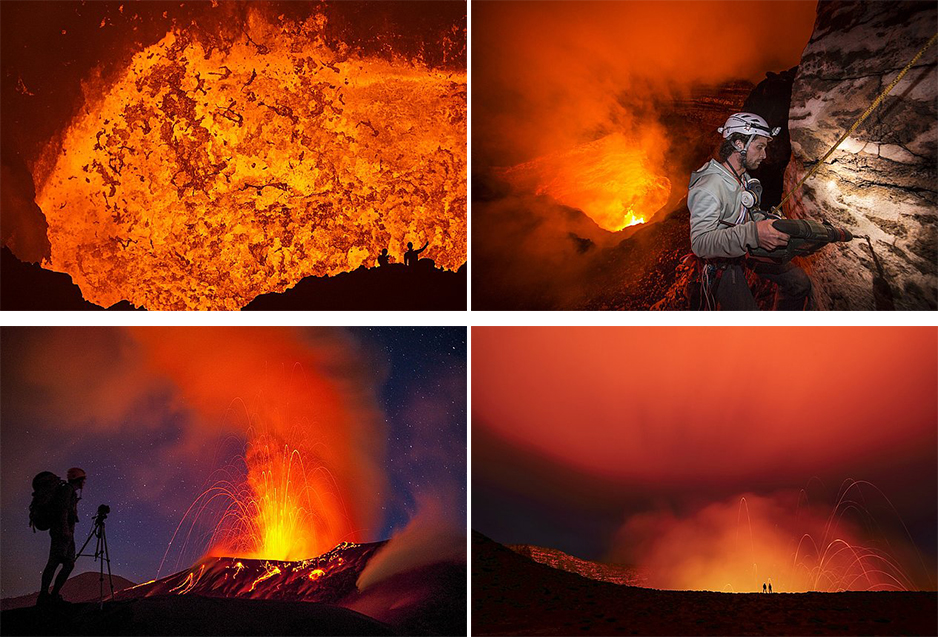 The Start of a Very special Relationship

For Boyer, the expedition in 2015 was just the beginning of his work at the site. Lohmann also returns to Ambrym several times a year, and keeps in close touch with the island’s inhabitants. “Three children there have been named after me,” reports the 40-year-old with a hint of pride. The oldest of these Ullas is now eight. Lohmann’s special way of working has earned her the honour of serving as a namesake: Drawing on her great perseverance, empathy and warmth, she focuses entirely on the topics at hand and, above all, on the people at the places she visits. This approach involves mastering the local languages; that was the only way in which she could gain the trust of the Anga people in Papua New Guinea, for instance.

“Tribe elder Gemtasu welcomed me like a daughter. My now-husband, Basti, officially asked him for permission to take my hand in marriage – he even gave him a pig for my dowry,” says the photographer with a smile. Gemtasu has since passed away. Prior to his death, he persuaded Lohmann to make an unusual promise: Gemtasu wanted to become the first of his entire generation to do as his father had done and follow the old tradition of mummification. And he asked Lohmann to document the process. When the time finally came, she struggled with the idea, but then ultimately decided to take on this difficult task. The time-consuming process resulted in unique, intimate work that provides special insights through majestic pictures. 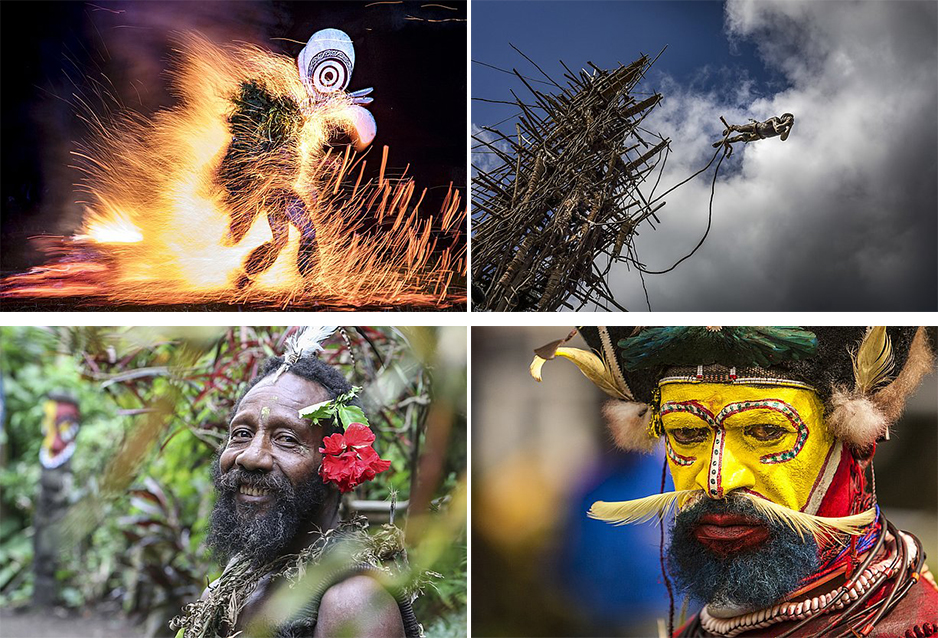 And to avoid unpleasant surprises such as those that used to occur during book production, the photographer now submits her photos once they have been fully processed. “When I have the ICC profile of the print and process the images in the softproofing view, I can be sure that the printed images will look the way I want them to – they reflect the way in which I saw the situation and want to preserve it,” Lohmann explains. The built-in calibration sensors of her CG series monitors have been a great help to this end; they make it possible for the screens to independently ensure that the reproduction always precisely corresponds to the file. They even do so when Lohmann is out working in the field and the monitors aren’t attached to a computer. Once she comes back home, she can immediately start processing the results of her current project, her family’s ‘European adventure’, without having to worry about technical concerns such as monitor adjustment beforehand. 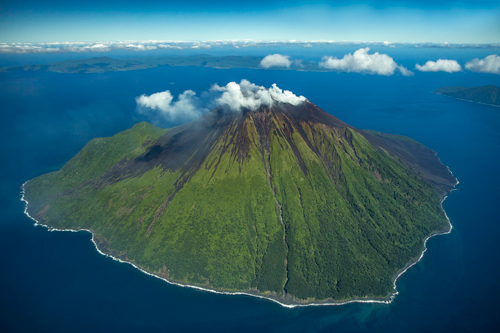