Daniele Barraco - A Photographer with a Passion for People | EIZO

What sparked your passion for photography and when did you decide to specialize in portrait photography?

Images have always fascinated me. I distinctly remember how I sat in the living room as a young boy and was completely spellbound watching a slideshow made up of my dad’s holiday photos. I used to always take out the individual slides from the projector, hold them up to the light one by one and then pick the ones that I liked the best; that was the editing process in my childhood as it were. This memory resurfaced years later when I first developed a general sense for aesthetics and then later an interest in photography as well.

I first came face-to-face with portrait photography right at the very start of my career. I think it was basically a way of overcoming my shyness. I took the opportunity to meet people and challenge myself, which in turn gave my personality and my social skills a massive boost.

A portrait photographer has to develop a certain empathy with their subject. What do you do if that doesn’t work?

Empathy is a crucial element in portrait photography. If the photographer and the subject are able to get on the same wavelength, the results are fantastic. It might also end up being the complete opposite with a total lack of empathy between the two, but sometimes that also produces an unexpected, yet honest and pleasing outcome. Personally, I rely on my instincts and impressions while I’m working. I don’t want to force anything; I consider myself to be more of an observer who adapts to the situations developing spontaneously in front of me and who is ready to capture them thoughtfully and skillfully. If you put yourself in the subject’s shoes, you get a completely different perspective to that of the photographer. I think over the years I’ve probably developed a sixth sense when it comes to dealing with people and I know now to avoid strange and awkward situations.

Was it your patience or your love of finding beauty in the fine details that got you to where you are today?

My attention to detail is undoubtedly a key factor in both my job as a photographer and my private life. But becoming a successful person talented in the medium in the long-term is simply a question of patience and stamina. I’m not about to stop any time soon – I always have my sights set on achieving one goal or another – and every goal that I achieve opens the door to the next step, the next level. After working as a photographer for ten years – with a brief spell as a director sprinkled in (that is actually still ongoing) – I can say that with absolute certainty. I always used to approach things with a large degree of apprehension and suspicion, but now that I’ve developed and grown in terms of my work, I actively seek out the new and the unknown – it’s the fuel that keeps my passion burning. Everyone is different and unique and every path we take leads to a result – it’s inevitable; sometimes it’s even the path itself. As the saying goes: the journey is more important than the destination, or rather, the journey is the destination; every path is shaped by challenges and success, influenced by that sixth sense I talked about earlier, not to mention the emotions that helps us rise to the challenge.

How much has the ColorEdge CG319X changed your post production process?

I now spend less time sat in front of my computer since I’ve started using the CG319X. I can engage more effectively and with greater precision if I need to make adjustments, both in terms of color and texture. Since it is a 10-bit monitor, gradations and more complex shading can be reproduced in a linear way without aliasing. As someone who uses very soft illuminance in front of gray backgrounds, I find that it makes the task a lot more enjoyable and satisfying. I also actually don’t have to do anything in terms of calibration anymore either. I had to calibrate my old monitor manually with a spectrophotometer. Now, the CG319X does all the work and calibrates itself automatically once a week according to my preferences. 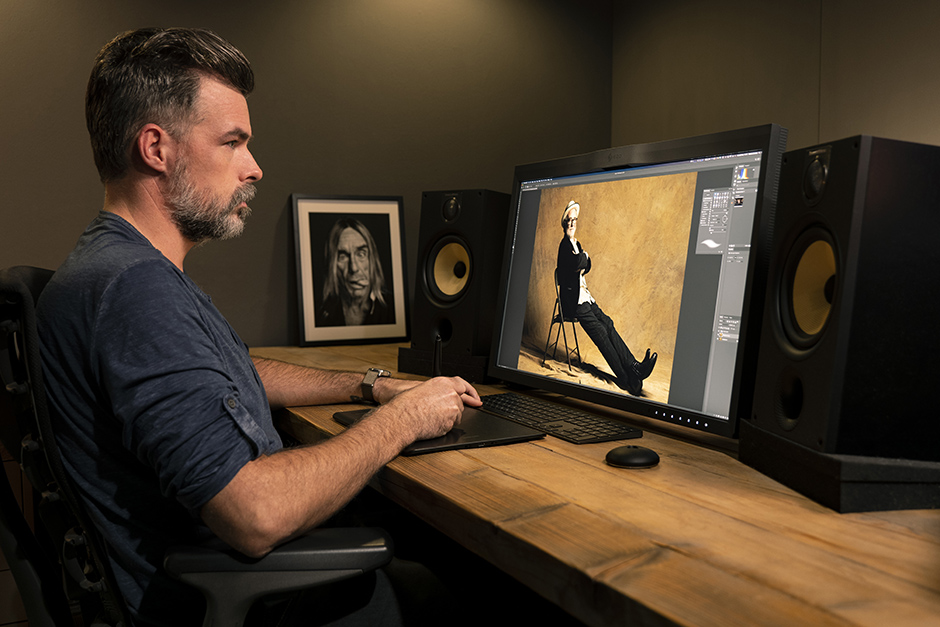 Tell us about your most influential encounter and your publication in Vanity Fair.

I have met two people that completely changed my creative life. The first and most important one is my partner, Alice. She saw the potential I had to be a photographer and encouraged me to go for it as a career; so it’s actually partly thanks to her that I’m sitting here today being interviewed by one of the world’s best-known monitor manufacturers. The second life-changing person I met was singer-songwriter Francesco De Gregori – Alice was responsible for that one, too. We’ve been friends for almost a decade now – not that you could have imagined that when we first met! But at some point, it suddenly blossomed into a true friendship with a huge amount of mutual appreciation. I’ve learned so much from Francesco, although he’d say it was never his intention to teach me anything. Some people just simply radiate charisma and expertise and have such an attuned six sense that they give you input without meaning to or even realize they’re doing it. Thanks to Francesco, things simply developed and after countless photos and the Vero dal Vivo (‘Real Life’) documentary produced by Caravan in cooperation with Rai Cinema, I reached another important high point in my career. I could also say that it’s a small dream come true, a goal that I’ve been pursuing for years: the cover of Vanity Fair, which has always been a gold standard for us photographers. 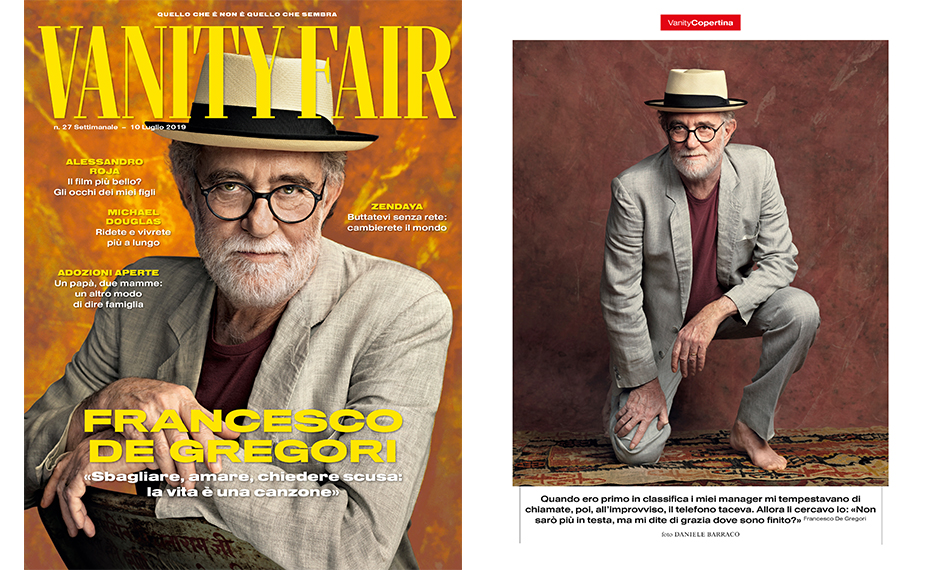 After I achieved this milestone, I frequently took the time to stop and reflect – something that is particularly important after doing this job for a decade. After some periods of reflection, I came to the following conclusions:

1. Luck counts for more than preparation. It has always been clear to me that an expert is good at what they do; but I’ve also noticed that a slice of luck is often required to get a project going that you might have been trying to jump start for a month or even a year. There is rarely any sort of logic behind these sorts of things; you simply need to be ready to go and react quickly to seize the opportunity with both hands.

2. We’re not saving the world with our photos; we’ve probably made it even worse truth be told. That’s why you always need to keep your feet on the ground and stay focused – that’s more productive than wanting to prove you’re something you’re not.

3. A good photographer makes a quick profit, but a professional artist can only win in the long run. You can’t predict how your career is going to play out: you can make all the comparisons and forecasts you like; reality often looks totally different. Being able to adapt quickly combined with a healthy dose of optimism can help when it comes to shaping your own career. In this job, the artists who become famous are often the ones who complement their enormous talent with two other things: endless reserves of stamina and patience.

4. Fear and inhibitions don’t help, they only hinder. Letting yourself go when being creative is probably one of the few true freedoms that we have and that we need; finding the right spiritual balance during the creative process helps us during our artistic endeavors.

5. There’s a workshop for everything else that I didn’t mention above (but it’ll cost you!). Just have fun! We can’t take ourselves too seriously, otherwise things might get very dull.

Daniele Barraco (aka DB) is a renowned photography specializing in entertainment, celebrities, and portrait photography. His images have been published in Vanity Fair, Rolling Stone, Sportweek, Corriere della Sera, Style Magazine, Le Figarò, The Guardian, The Observer, and The Sydney Morning Herald. Success as a director now also sits alongside his accomplishments as a renowned photographer.