Christoffer Hjalmarsson is currently in the limelight. The 2015 winner of the Image of the year, a competition sponsored by EIZO, just won the second prize in this year's competition in the category everyday images. He was also praised by US NPPA, National Press Photographers Association, who recognized him as the world's third best press photographer. And in 2016, his first book was published – Afghanistan's Only Pig. We had a brief chat with Christopher to hear about his motivations, the importance of images for storytelling and how far he thinks it is reasonable to go in photo editing. 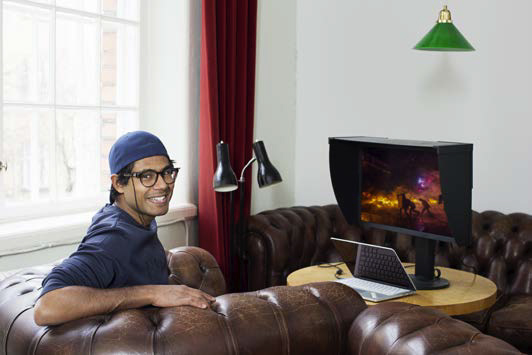 Christoffer Hjalmarsson is undoubtedly one of the hottest young rising stars among the Swedish photographers. Last year, he was praised for the image that showed an inferno of fire and smoke in the middle of the Ukrainian capital. The picture is significant for Hjalmarsson deed; His motivation is to make visible what is going on in the world with people who find themselves in the midst of the disaster.

“I am driven by the image as a means of telling a story. Image has an incredibly important role for journalism. Often you look at the picture first, before reading the text,” says Christoffer.

Winning a competition is not an end in itself to Christoffer, but rather an opportunity to, once again, tell the story of the picture.

In Christoffer's archive there are many strong images; Ebola victims in Liberia, ruins after the earthquake in Nepal and people trying to survive in a war-torn Syria.

“I want to show the people in the middle of these events. But the people in my pictures are never victims; I want them to tell their story. They are not objects, but part of the story.”

Christoffer also believes that it is important that there are still professional photographers with a journalistic background. In a world where everyone is equipped with a camera in their pocket taking pictures all the time, there must also be images that he says can be trusted. An amateur photographer’s angle or intentions can always be questioned.

The topic discussed leads naturally to the question of a professional photographer’s ability and access to tools for image editing. On the topic, Christoffer calls for prudence.

“The visual technology should never take over the contents of the image. You need to respect the image as it is, and therefore I do not like hard-edited images. For me, editing is really just about fixing up what is bad; light, contrast and in some cases it may be about to make a poorly exposed image a little better.”

For the past six months Christoffer has been using the EIZO ColorEdge CG248-4K when he works with his pictures.
“For me the EIZO monitor facilitates my work immensely, when the image is exposed on the screen, it displays almost a completely new reality. Other dimensions are made visible, unlike when I'm just exposing it on my Retina display that I have when I'm out doing the shooting.”