ASEAG, Aachener Straßenbahn und Energieversorgungs-AG, has been the mobility services provider for the German city of Aachen and the surrounding region for more than 130 years. The company has therefore played a crucial role in shaping the city of Aachen and has always pursued its objective of organizing and improving public transport for people in the region.

All of the key information on the current timetable and important emergency messages converge in the ASEAG’s traffic control data center. As a result, the control center dispatcher on duty is always able to quickly implement suitable measures in the event of service disruptions and emergencies.

“The control center system that we have implemented (ITCS = Intermodal Transport Control System) is an extremely important element of the infrastructure at ASEAG. For this reason, we use the appropriate reliable hardware for visualizing information, as well as for the network infrastructure and PC and server systems required for operation,” explains qualified engineer Frank Standke, Head of IT at ASEAG.

ASEAG has been using EIZO monitors in various areas of the business such as administration, workshops, and marketing for many years. “We have only ever had positive experiences with EIZO, which is why we also decided to install the monitors in the control center. The factors of reliability, image quality, service, and price-performance ratio played a crucial role in the decision-making process,” emphasizes Frank Standke.

ASEAG set up two identically equipped dispatch work stations each with seven FDF2303W monitors in the fall of 2013. At least one of the two work stations is manned during operating periods. “The previously installed monitors were normal office monitors. As they were in use all day long, disruptions or total system failures occurred now and then,” says Frank Standke, explaining the problems that often occur when using monitors that have not been designed for constant operation throughout the day. In contrast, the FDF2303W model from EIZO has been specially designed for 24/7 use in security and monitoring applications. Its unique image quality and reliability therefore makes it perfect for control centers.

As a result, the FDF2303W monitors allow ASEAG to keep everything in sight for a good journey at all times. 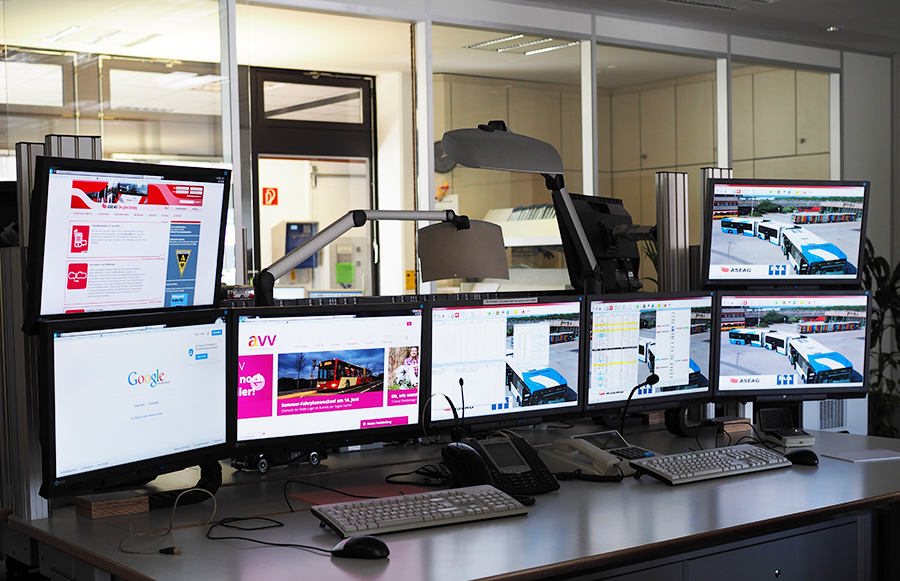