Hakusan, Japan, April 15, 2011 – Eizo Nanao Corporation (TSE: 6737) has received inquiries regarding product safety since the accident at the Fukushima Daiichi nuclear power plant following the Great East Japan Earthquake on March 11, 2011. To alleviate any customer concerns, EIZO is issuing this statement to clarify the location of its factories in relation to the Fukushima Daiichi nuclear power plant and explain how it is ensuring its products remain safe.

EIZO operates three factories in Japan. All are located in Ishikawa Prefecture and are approximately 400 km (248 miles) away from the Fukushima Daiichi nuclear power plant (see illustration below). The daily reading of environmental radioactivity levels collected by the Japanese Ministry of Education, Culture, Sports, Science and Technology shows that radiation in Ishikawa Prefecture remains at normal levels1 since the Fukushima accident.

Furthermore, more than 90% of all EIZO products sent overseas are shipped through the ports of Kobe and Osaka, both of which are 600 kilometers (373 miles) or more from the Fukushima Daiichi nuclear power plant. The remaining products are sent by air. Radiation levels that have harmful effects on human health have not been detected at any airports in Japan2.

Measuring of Radiation Levels of Products

To ensure product safety, EIZO has implemented a process where it randomly selects finished products from its production line every day and measures for radiation to ensure they do not exceed a specified criterion value of 0.2 μSV/hour.

This criterion value is less than the worldwide annual average dose of 2.4 mSV of ionizing radiation a person receives from natural sources as reported by UNESCAR3 (United Nations Scientific Committee on the Effects of Atomic Radiation) and shown in the calculation below.

EIZO will continue to implement appropriate measures to ensure the safety of its products. 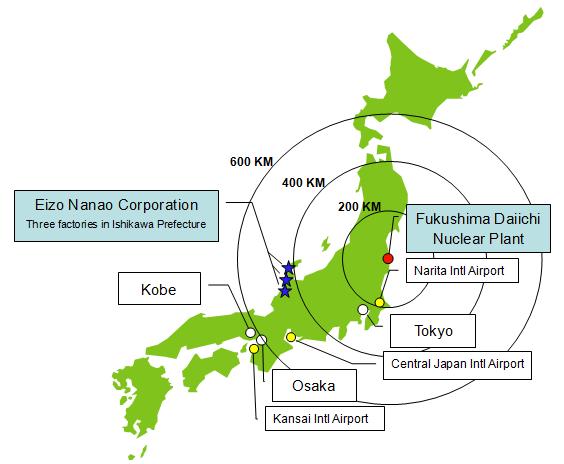