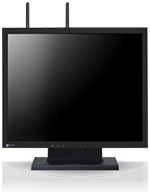 By connecting the monitor to a remote PC over a network, long distance video and audio signal transmission is possible with a single LAN cable or with a wireless LAN. The monitors can be used to control the PC either with a mouse and keyboard connected by USB or with the FDS1702NT’s touch panel interface. In addition, it is possible to connect USB devices such as USB memory, printers, or a DVD drive via the included USB port on a single machine, enabling multiple kiosks access through the network without having to equip each PC individually. The monitors meet the high-speed IEEE 802.11n wireless networking standard ensuring high-speed moving image display and touch panel operation.

The monitors can be installed in positions that are difficult to wire, such as suspended from a ceiling or hanging from a wall, or where installation space for PCs is limited. Examples include retail outlet for displaying advertisements and factory production line where the monitor’s resistance to dust and shock will provide further value.

The FDS1702NT comes with an analog resistive touch panel which accepts touch input from bare or gloved hands as well as pens. It rarely reacts by mistake to foreign objects such as dust or to being under light sources, making it reliable and stress-free to use.

EIZO is a leading global manufacturer of high-end visual display products. The image quality, long-term reliability, and innovative features of EIZO monitors make them the products of choice in many financial trading rooms, back offices, hospitals, air traffic control centers, and design studios throughout the world. Founded in 1968, EIZO is represented in over sixty countries by a network of subsidiaries and exclusive distributors.